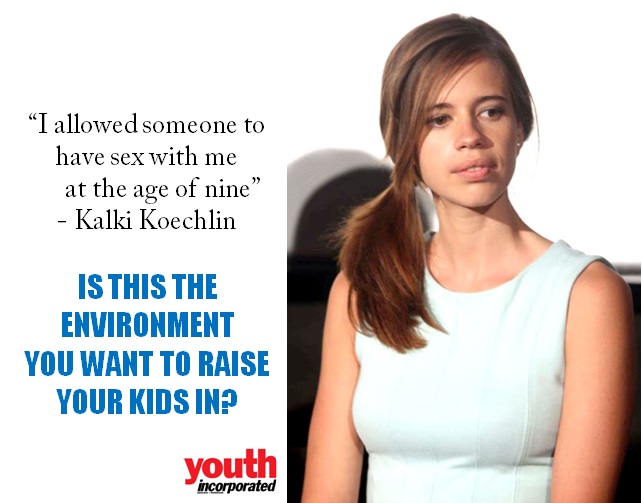 Kalki Koechlin has always been known to set an example as an actress as well as an individual who believes in speaking her mind. Recently she confessed to being sexually abused at the age of 9 and spoke about child abuse being an important issue to be discussed and not to lock it away from sight. She strongly believes in parents removing the taboo around the word ‘sex’ and private parts so that their children can speak openly and be saved from potential abuse. We at Youth Incorporated strongly believe in the empowerment of women and encourage them to speak up about issues that exist, particularly with respect to women’s safety. It is crucial that we get vocal about such problems that plague our society and not shun away from tackling them, so that we ensure a better environment for the women we respect and admire. No woman should feel threatened and keep looking over her shoulder to be wary of predators as she walks by herself at night. Let’s make this world a better place for women. You go, Kalki! Via Humans of Bombay – The reason i spoke out about my sexual abuse is not to get people to feel sorry for me but to give others who have had similar circumstances the confidence to talk about it. I allowed someone to have sex with me at the age of nine, not understanding fully what it meant and my biggest fear after was that my mother would find out. I felt it was my mistake and so I kept it hidden for years. If I had had the confidence or awareness to confide in my parents it would have saved me years of complexes about my own sexuality. It’s important that parents remove the taboo around the word sex or private parts so kids can speak openly and be saved from potential abuse. I believe in being myself every step of the way and not hiding my true self from society, whether that means getting a divorce because me and my husband didn’t want to pretend for other people, or wearing shorts because it’s a hot day or choosing a career which is unstable but creatively satisfying, or admitting to my weaknesses because learning from them has led to my strengths. I’ve also been asked a lot about love lately. Well, i just feel love is not up for public display. Love is not the pictures you put up on social media. Love is not a certificate of marriage. Love is not property, children, family or ownership and love is not a barter – ‘I’ll give you this, if you give me that.’ Love is giving without expecting in return. It sounds like the ultimate act of self sacrifice right? But the trouble with giving, and I mean happily and limitlessly giving without expecting in return, is that one has to be self sufficient, and full of love for oneself. So, in a way, I believe love is selfish, because only a person who loves themselves fully, can give fully without expecting, without needing, without dependency. I’m not there yet, but I fight to be myself everyday in a world where we are constantly pressurized to be someone else, and that daily fight is my pursuit for love.