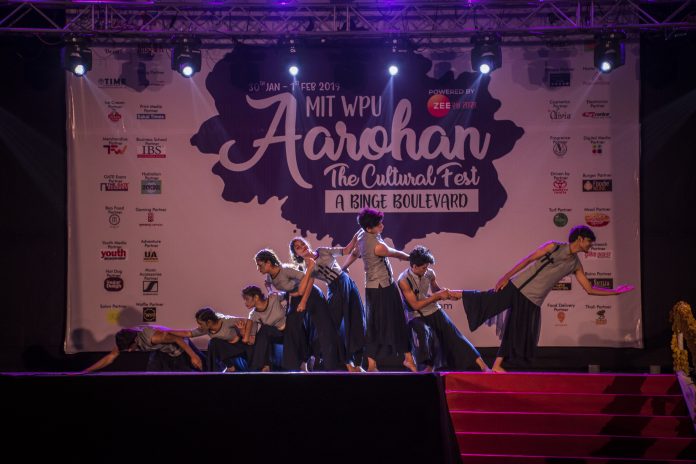 For three days, MIT World Peace University, Pune was bustling with people as they organized their annual cultural festival, Aarohan, which has proven to be one of the most steadily rising fests in Pune.

On the first day of the festival, Aarohan held various cultural competitions such as Street Play, Solo Singing, Mono Acting, and Art Maestro. They also held their flagship competition of Group Dance, which saw Vernon Monteiro as the judge. Vernon Monteiro is the founder of The V Company, the only Indian dance crew to have participated in the World Hip Hop Dance Championship. The V Company was also the inspiration behind the Bollywood movie, ABCD 2.

On the second day, Aarohan saw independent bands battling it out in Band Wars, while it also saw one of the best stand-up comedians, like Nishant Suri, winner of Comicstaan, Vipul Goyal, fame of ‘Humorously Yours’ and Piyush Sharma tickling the audience’s funny bone with their keen observation of daily life, and their humorous take on it. They performed to a crowd strength of about 1200 people.

Aarohan also became the first cultural festival to incorporate Pune’s primary head start of culture, theatre, by organizing a Theatre Fest. The Theatre Fest featured two plays originally performed in Purushottam Karandak 2017. The first was ASL Please, a play from Modern College, which stood second in Purushottam Karandak, while the second was Sorry Paranjape, a play from BMCC which stood third in the same competition.

On the third day, ‘The Local Train’, a Delhi-based rock band, enchanted and mesmerized a crowd of 8,000 people with their myriad range of songs, from ‘Khudi’ to ‘Choo Lo’. Their songs often explore the idiosyncrasies of life and being in love, which resonates with the youth, making them a hit at cultural events all across India.

Other than these events, Aarohan had Pune’s biggest flea market this year, with food items ranging from the unique ‘Ice-Cream Misal’ to Pune’s staple food, ‘Misal Pav’ to various other cuisines such as Chinese, Italian, and even more Indian cuisines. The flea market was also filled with stalls for shopaholics who could buy T-shirts, badges, mobile covers, unique gift items and much more.

Aarohan also featured a huge Informals arena, which had various activities such as paintball, bull riding, wall climbing, body zorbing and even more for the crowd to have a good time with their friends.

Conclusively, Aarohan continues to become a bigger brand name that strives to grow and nurture cultural talent while being the go-to place for a plethora of activities to do.