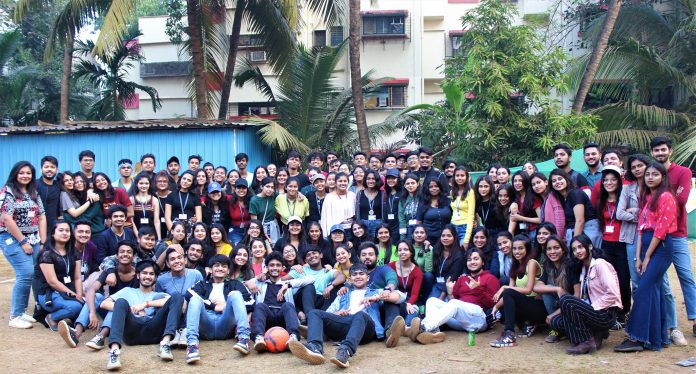 Students of L.S.Raheja College of BMM Department organized a pre sports event ‘Quidditch’ for their annual media festival ‘Retake’ on the 13th of January 2020 and a number of colleges across Mumbai participated with great energy.

Every Muggle must have fantasized about being a part of the exciting sport of witchcraft and wizardry world “Quidditch” and team Retake invited the students of the media fraternity across Mumbai to participate and be a part of this unique yet fun event. Quidditch, being the pre-event for Retake had all the excitement and enthusiasm of the actual game minus the flying of course, although the experience was in itself magical.

The contestants are provided with a broom which they are supposed to hold between their legs and quaffle (ball) in their hands and run to pass the quaffle through the hoops to score a goal.

Being ‘Temple of Emcees’ as this year’s theme for Retake, a tribute to the Hip Hop culture the college team names were derived from the hip hop industry itself, both national and international.

The game Jay-Z vs Wiz Khalifa and resulted in an amazing win for the Wiz Khalifa, with the score of 0-20. The next match was between Drake vs Rajakumari. It was an intense match that left the scoreboard ticking every time. That made it hard to predict the winner. The rivals for the third match were Travis Scott and Divine which ended with a win for the latter team. The next match was between Snoop Dog and Naezy. Contingent Naezy had an amazing win. The match with 21 Savage went in favor of Team Retake.

Semi-finals were played among the 4 finalists: Naezy vs Rajakumari and Travis Scott vs Wiz Khalifa.

The final match between Travis Scott vs Naezy was the highlight of the event, keeping the audience on their toes. Both teams were equally strong and gave a tough fight resulting in the decision for the win to be taken by a sudden death penalty score which was triumphed by the team Naezy.

A game is no fun without the supporters of the teams playing. The volunteers of the respective contingents playing cheered for their teams using various quirky and funny slogans which made the events even more exciting to watch.

The contingents had also got snacks and delights for Team Retake as a token of thanks for organising the event.

The day of Quidditch was long and filled with exhilaration and the contestants went home with a feeling of fullness, looking forward to the equally zealous for the upcoming Retake festival.