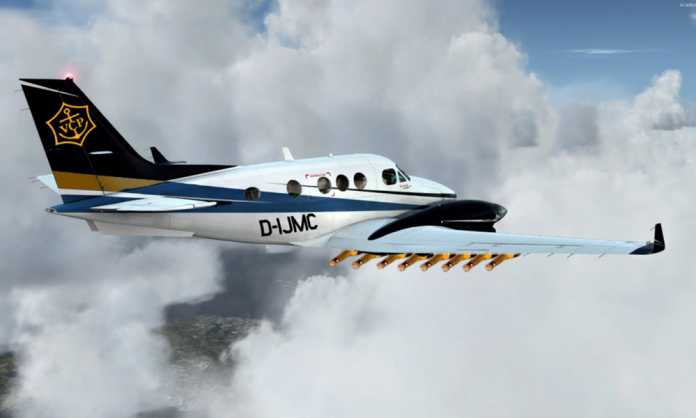 Cloud-seeding is a procedure used mainly in the United Arab Emirates to increase precipitation in a largely desert country. This procedure can also be used to suppress hail and fog near airports.

In this procedure, a plane is generally fitted with substances such as silver iodide, potassium iodide, dry ice or liquid propane. The plane then disperses these substances into the clouds to make them denser. This can also be done from the ground through generators. Rain usually occurs when water droplets in the air become too heavy to stay suspended. These chemicals allow these water droplets to form ice crystals, hence increasing rainfall or snowfall in some cases.

The method has seen some success in Australia, France, Spain and the US. The UAE especially employs this method, and it is said to have caused storms in many Emirates including Abu Dhabi, Sharjah and Fujairah. Snowfall is also observed sometimes in the Emirate of Ras-Al-Khaimah. In UAE, salt crystals are used for the job.

However, many ecologists have stated that it is impossible to analyse whether the process truly makes a significant difference as it is rather difficult to analyse weather patterns and how cloud-seeding affects them.

India has also taken up cloud-seeding to increase rainfall especially in the tropics of Karnataka. However, this technique is in no way new to India. In the 1980s, Tamil Nadu was the first state to use cloud seeding. Karnataka and Maharashtra have also used this method to help curb the droughts which affected the two states. However, it seems to be highly unsuccessful in India, though, one cannot easily calculate the success rate.

Cloud-seeding is a process which requires further research as it is still uncertain if it impacts weather in a way which will help curb droughts world-over. Though the method is said to be non-pollutive, one can only guess what happens when we mess with the weather too much. Floods are also an after-effect of cloud-seeding as seen in Abu Dhabi this January. We can now only wait and watch as more countries indulge in cloud seeding.