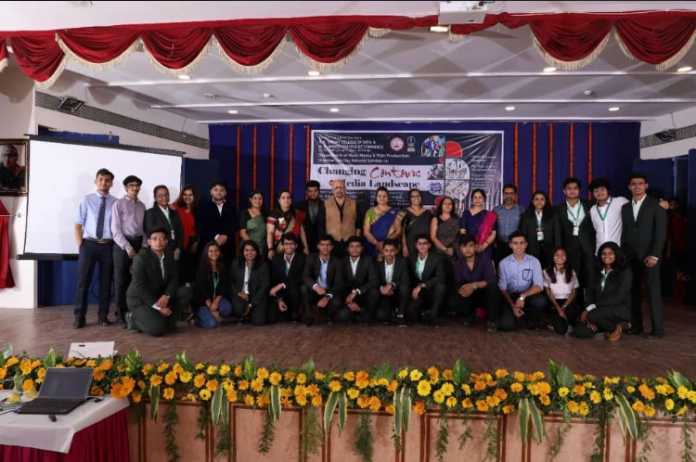 On August 10th 2018, the students of the department of mass media and film production at KES Shroff college in Kandivali held a seminar on the ‘Changing Contours of the Media Landscape’, which was an interactive and informative session on the world’s ever-changing vast media landscape. Faculty and students from other institutions were also invited to participate.

The seminar kicked off with a speech by Chief Guest Bharat Dabholkar, theatre personality and the advertising mogul behind Amul India’s creatively famed ad campaigns. He touched upon important aspects of India’s advertising scenario, and emphasized the importance of ‘less is more’. He also entertained questions from the audience, who was also eager to learn about his theatre career.

Arun Arora, former President of the Bennett, Coleman & Co., and the Ex CEO of the Economic Times introduced speaker and friend, Journalist Gurbir Singh. Singh is President of the Mumbai Press Club and the Contributing Editor for The New Indian Express. He enlightened the audience with the evolution of news in the country, communication of news and the platforms used. “There is a certain depth about newspapers in our country, in the form of dissemination of news”, he said, adding that India has one lakh, five thousand registered newspapers. He also spoke about the Freedom of Press in the country, and the challenges the press themselves face in practicing this freedom. However, he also highlighted the advancements India has made with regards to news consumption. “We are a multi-faceted country which is on all platforms – we are on newspapers, we do appointment viewing, and we’ve also gone digital. Those are our biggest signs of change” Singh said.

Arora then introduced Arun Anant, Former Business Head of The Economic Times at Bennett Coleman & Company Ltd., and Director Revenue & Strategy at the Hindustan Times. He spoke to the audience about the statistics of journalism, and consumer behaviour with regards to the media. He also elaborated on the future growth of the media, especially with digital content viewing platforms like Netflix.

The stage was then opened for an interactive question and answer session, where students asked these notable speakers some hard-hitting questions about issues such as fake news, yellow journalism, lynching, the threats faced by those working in this field, and the ‘undeclared emergency on the media’. Speaking to us about the lack of credibility affecting news consumption, Gurbir Singh said, “People are very cautious about what they trust. They are now questioning if people have paid for a particular piece of news, and this poses a great threat to news organisations. The only solution is for readers to stop reading a newspaper or watching a channel that they suspect. People are shunning organisations that practice yellow journalism, which is a good sign”.

Post lunch, Dr Meenakshi Iyer Gangopadhyay, Teacher at the renowned and prestigious Nalanda School of Arts, gave an enlightening talk on the depiction of classical dance, and the importance of traditions and values in our culture. She also had her students perform various ‘moods’ through facial expressions like happiness, anger, disgust and fear. She also gave an aesthetic performance wherein she narrated a story about a Lord Vishnu and his devotee, an elephant.

The event ended with an exciting Panel Discussion with panellists Bharat Dabholkar, Dr Samvedna Amitabh, Dr Michelle Philip, Dr Meenakshi Iyer Gangopadhyay, and Shyam Shankarmani, on whether the media are purveyors or debasers of art and culture. They had some interesting insights into Indian art representing our country globally, and how the media and the world apart should work hand to promote culture and Indian art.

The event was an astounding success with students having a lot to take back from, equipped with a deeper understanding of the vast landscape that is the media.