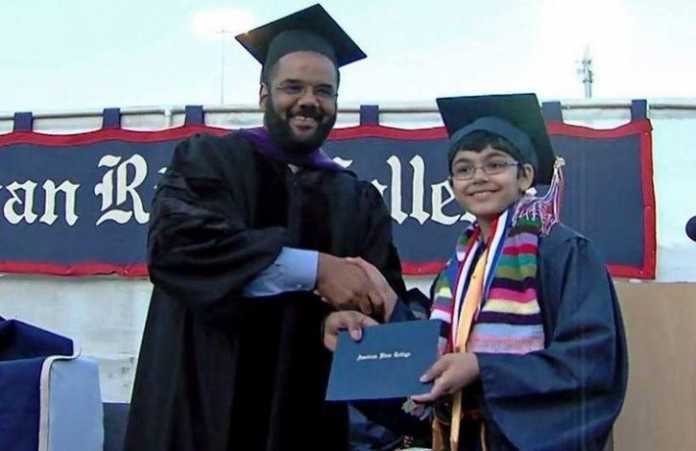 In a commendable feat for someone at a tender age of 15, an Indian-origin teen in America, Tanishq Abraham, has received his degree in biomedical engineering from UC Davis in California, with the highest honours. Tanishq had turned 15 just a few days before receiving his degree, with the words “Started at 12, finished at 14. Trust me I am an engineer!” on his graduation cap.

Born to a software engineer father and a veterinary doctor mother, Tanishq had previously graduated from California Community College at age 11. “He’s got a lot of passion and we have to keep up with him, pretty much,” said his proud parents, Bijou and Taji who hail from Kerala. The Abrahams discovered that Tanishq was ‘a few years ahead’ even in his kindergarten and his academic journey transpired from there.

At age 5 he was enrolled at the American River Community college and even managed to crack some courses offered by Stanford University for ‘gifted youth’. At six, he took online high school and college level classes in challenging and complex subjects such as chemistry, paleontology, biology, and geology. He also published an essay about astronomy on the NASA Lunar Science website, and even TEDx talk to his repertoire. His achievement, however, did not come easy. “This year has been very hard for him and us as we also have to be on campus late sometimes till 11 pm when he is working on his senior design project or capstone project. Sometimes his 22-year-old classmates cannot understand why he cannot do an all-nighter! As parents, we are very particular that both our kids get enough rest & sleep, a minimum of 9 hours to 10 hours…but in the past few months – in his senior year, it has come down to 3 to 4 hours,” says Taji.

As for the future, Tanishq plans to pursue the doctorate programme at UC Davis, and eventually medical school which he hopes would help him find solutions to major problems such as cancer. He is interested in developing new and more effective treatments for cancer.

He has already been accepted into the UC Davis graduate program where he plans to get his M.D. in the next four or five years. But his long-term goal, however, is to be the President of the United States, no less!