Book lovers despise the films and film lovers can’t understand the fuss around the books. But once in a while, a brilliant movie adaptation of a book satisfies both the bibliophiles and cinephiles. Aparna Sundaresan digs up 10 such gems

Nick Hornby’s wickedly funny coming-of-age novel transitioned to the screen as an equally funny but sanitized film. 36-year-old Will Freeman is a bachelor with the devil-may-care attitude of a teenager, while 12-year-old Marcus Brewer is an old soul who doesn’t know how to be young. Will and Marcus teach each other how to grow up and be themselves.

What bibliophiles love: Hugh Grant cast as Will. So perfect.

What bibliophiles hate: The feel-good, rom-com revamp of the story. And the ending which pales in comparison to the book’s ending.

Tyrannosaurus, velociraptors and pterodactyls, oh my. A dinosaur extravaganza that captivated the imagination of a generation of kids was adapted from Michael Crichton’s science fiction that was more a cautionary tale against genetic manipulation.

What bibliophiles love: The exceptionally real dinosaurs in the film. The spectacular visual effects bring the book to life.

What bibliophiles hate: The change in park creator John Hammond’s character; in the book he is an unapologetic megalomaniac who learns nothing from his mistakes, which makes for a more interesting character.

What bibliophiles love: The punk-y, bizarre and hallucination-addled ambience of the film which captures the spirit of the book.

What bibliophiles hate: The loss of the anachronistic narration which while streamlines the plot also takes away the other issues the book deals with – abortion, HIV/AIDS, nationalism and the dole.

Helen Fielding’s new-age heroine for all urban women in the form of Bridget Jones was revelatory. There was finally a woman who wasn’t Elizabeth Bennet or Mata Hari, but a woman like all of us – struggling with body issues, bad habits and complicated love lives.

What bibliophiles hate: So many zany scenes in the book overlooked because the film had a time constraint. Boo!

6. To Kill a Mockingbird

Harper Lee’s extraordinary novel on a white lawyer defending a black man wrongly accused of rape during the 1930s was Pulitzer-winning material. And the movie wasn’t far behind; Lee was so pleased with the adaptation that she called it “a work of art”.

What bibliophiles love: Gregory Peck as the hero Atticus Finch who played an unplayable role to magnificence.

What bibliophiles hate: The absence of Aunt Alexandra in the film, who is an important character in the book.

The funny, inspirational and thought-provoking saga of Pi Patel as the lone survivor of a shipwreck with a tiger for company became a Hollywood blockbuster. Yann Martel’s epic is a deep exploration of religion, spirituality and what it means to be human.

What bibliophiles love: An honest-to-book adaptation with stunning visuals.

What bibliophiles hate: The omission of Pi going blind during the course of his journey and meeting another shipwreck survivor – a tragic yet touching episode in the book.

A young girl consumed by jealousy, self-pity and a touch of bitterness wrongly convicts a close family friend of a heinous crime, and then spends a lifetime atoning for that grave mistake. Ian McEwan’s literary masterpiece takes readers through the complex and nuanced spaces of people’s minds.

What bibliophiles love: The sense of tension, urgency and pregnant emotion in the film that the book lacks owing to its wordiness.

What bibliophiles hate: The loss of depth. The book is presented through multiple perspectives to show how little the characters understand of each other. The film is superficial in comparison.

Thomas Keneally’s Schindler’s Ark became Schindler’s List at the hands of Steven Spielberg and an award winning piece of cinema at that. Remarkable, considering Keneally had trouble condensing his story for screen and the task went to two other writers.

What bibliophiles love: The appropriately grim treatment of a Holocaust story.

What bibliophiles hate: The movie pretending to be a documentary when it is in fact based on a work of fiction and has numerous factual inaccuracies.

Francis Ford Coppola’s adaptation of Mario Puzo’s novel is often cited as one of the greatest films ever made. We concur.

What bibliophiles hate: The neglect of Johnny Fontaine, just one of the many characters that are overlooked in the film but are significant in the book.

The tale of a man suffering from insomnia who forms a fighting club to beat up others and to be beaten up to relieve collective frustrations gave birth to a whole new cult. Chuck Palahniuk’s Fight Club is edgy and dark, but sublimely funny, both in its book and film versions.

What bibliophiles love: The inclusion of multiple themes of the book in the film. Consumerism, identity, mental well-being, personal empowerment, family – all packed into two hours comfortably.

What bibliophiles hate: The changed ending. The book ends on a much more dubious and sinister note. The film ends happily.

What are your thoughts? Leave them below in the comments section 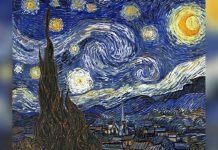 The Genius Of Starry Night