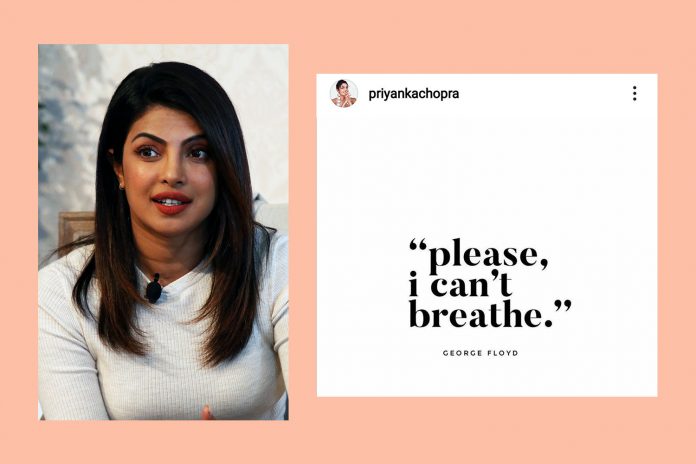 Recently social media has become a hotspot for debate about how Priyanka Chopra is practicing performative wokeness. She posted “I can’t breathe” – the words spoken by George Floyd on Instagram 3 days ago. Critics are blaming her for not speaking up about issues in India – discrimination against Dalits, Muslims, migrants, etc. while being woke about international issues. However, I do not blame Priyanka Chopra for practicing performative wokeness.

Not expressing dissent is very different from having an opinion on something. An opinion on any political issue is personal, and it is an individual’s choice if they wish to express it. Articles that blame Priyanka Chopra for practicing performative wokeness do not understand that it is Priyanka Chopra’s personal choice if she wants to make her opinion public. Just because she is a celebrity, it does not mean that media houses can take agency over her life and scrutinize her for not making her opinions public.

The dissent culture in America is very different from that in India. While in America, Priyanka Chopra’s movies will not get boycotted if she speaks about racism. In India – she may receive death threats, blackmails, boycott threats, and a potential loss in followers for speaking about issues which are pro Dalit of pro-Muslim in nature. Speaking for one community in India is often perceived as speaking against another. A pro-Muslim actor may be labeled as an anti-Hindu or anti-national in India thereby dissuading them from supporting a cause publicly. In the US, Trump may reply to actors via a tweet, but in India, the actors can potentially get death threats from people with political inclinations. Hence, actors may face backlash for supporting any kind of political movement in India which makes them fearful to express their opinions. It is possible that Priyanka felt greater freedom of expression in America than she did in India due to which she expressed her support for the “Black Lives Matter” movement publicly.

The masses in India often shun actors for speaking about political issues publicly by boycotting films. Padmavati – one expected example in this scenario, where Deepika Padukone received death threats for glorifying a culture that was against public sentiment. The movie was seen as Pro – Muslim and the name was asked to be changed to “Padmaavat”. If this was the public and government response to a film that is open to interpretation, it is not difficult to imagine the consequences a celebrity would face for being pro Muslim or pro Dalit openly and speaking about their cause. Even after Deepika Padukone personally went to JNU to express her support for the anti – CAA protest, she was shunned by various Indians on social media, and faced threats from people to boycott her movie “Chhapaak”

Instead of criticizing celebrities who do not actively voice their opinions about issues in India, we first need to question why this is the case. We need to create an environment where celebrities are comfortable to voice their opinions without feeling a threat of risking their careers. Posting on social media isn’t the only way someone can express wokeness, and not posting on social media does not mean apathy. We need to create an environment where celebrities can make their personal opinions on politics public in India. Without creating a safe environment where dissent can be voiced, it is unfair to criticize celebrities for staying quiet until they are protected when voicing their dissent. Anything they do gets amplified by the media, it is highly likely that their dissent will be taken negatively by political figures and the celebrity will have to bear consequences.

Demands from celebrities like Priyanka Chopra to show the same level of expression in India as they do in America is an idealistic fantasy that ignores the real differences in freedom of speech in both countries. We need to create equality in freedom of speech before expecting similar behaviors.

Who Was Fr. Stan Swamy And Why Are Many Mourning His Death?

Are You Fortunate Enough To Be Unfortunate?

OPINION: Everything Is Wrong With Bombay High Court’s Verdict Over Sexual Assault

Do You Suffer From Mob-mentality?