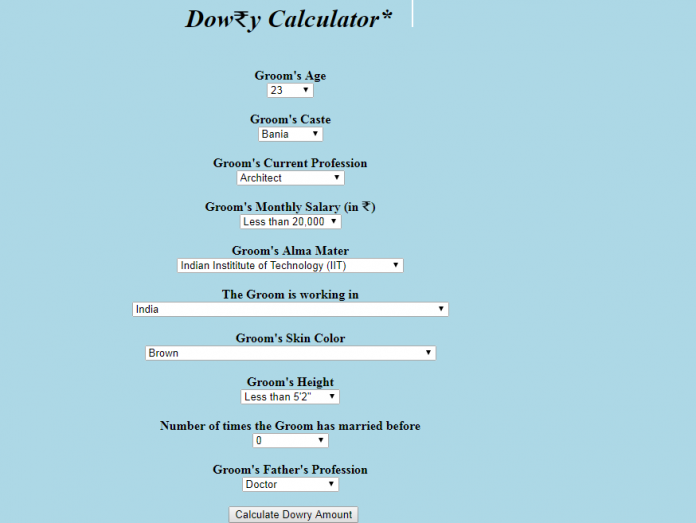 The internet has reached a new low as ‘dowry calculator’ is an actual website online. This sexist and absurdly racist website takes your personal details including skin colour, age, salary, education etc. and accordingly computes the amount of dowry you deserve (if you are a guy of course).

The website is crude, and Maneka Gandhi has recently spoken about banning the website altogether. The website also asks you for your caste and states a higher dowry if you are more ‘appealing’. In their case, this means fair, upper caste, good salary etc. Ones father’s occupation is also a category in the calculator.

The website says ‘dedicated to all the match-making aunties of India’ to seem like a joke, but how far can such a joke be taken? In India, a country where dowry is banned and yet people openly accept it, will it be taken as a joke? The website is highly offensive not only to the person filling up the details but also women and how they are expected to pay more as dowry if the person is more appealing.

The website has no place in a civilised society where people are trying to get rid of old traditions that are sexist or racist in nature. If it is a joke, not enough has been stated for it to seem like one and making fun of one’s caste and colour is very crass. The website needs to be taken down, before it causes any harm. Promotion of dowries or racism in anyway must not be encouraged. By discouraging such websites, we are taking a step against racism and sexism that has riddled India for ages now.