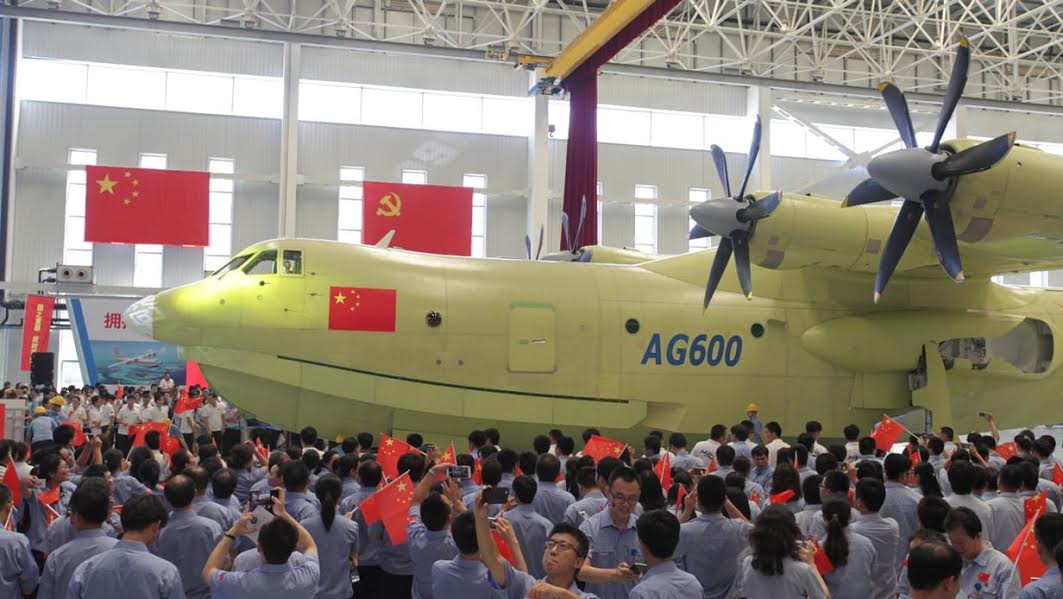 China has unveiled the world’s largest amphibious aircraft; dubbed the AG600,  it has a maximum take-off weight of 53.5 tons, a cruising speed of 500 km/h  and an expansive flight range of 4,500 km, according to state aircraft maker the Aviation Industry Corporation of China (AVIC). Beijing will be utilising it to perform marine rescues and fight forest fires. The state-owned Aviation Industry Corporation of China (AVIC) unveiled the first of the new planes in the southern port city of Zhuhai. AG600 is around the size of a Boeing 737 – which is far larger than any other plane to take off and land on water.

The Chinese plane, which targets the domestic market, will be ‘very useful in developing and exploiting marine resources,’ local media reported, adding that it could be used for ‘environmental monitoring, resource detection and transportation’. Before the AG600, the largest amphibious plane was the H-4 Hercules, christened the Spruce Goose, which was designed in the 1940s to carry allied troops in the battle.

“The AG600 is like a ship that can fly, with advanced gas-water dynamic engineering and underwater corrosion resistance technology,” Huang Lingcai, chief designer of the aircraft was reported by China Daily as saying. Furthermore, AVIC deputy general manager, Geng Rugang, said the plane was ‘the latest breakthrough in China’s aviation industry.’ A plan for the development and production of the AG600 received government approval in 2009.

Beijing is currently at dispute with nations including Vietnam, Japan and the Philippines over the rights to develop economic resources in waters off its shores. China is seeking to develop its own aviation sector so that it can challenge and does not have to depend on the foreign giants such as the Boeing of the United States and European consortium. However, China’s aviation industry has made a rapid progress in the last year.

From Copper Wired Telephone Calls To VoIP, Communication Has Come A...

The Time Of Unemployment Is Exhaustive, Utilise It At Your Fullest