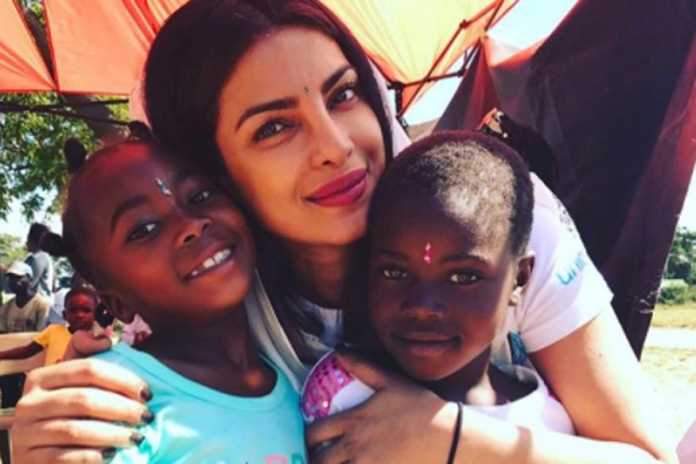 Priyanka’s trip to Zimbabwe has caught a lot of attention lately. Priyanka shared some of her pictures and stories from Harare, Zimbabwe. She talks about her experiences with the kids and how she feels grateful to finally get the opportunity to work with UNICEF.She said she wants to make good use of her popularity by bringing a change to the world. Priyanka talks about sexual abuse faced by children.

“I went to Zimbabwe as a Goodwill Ambassador for UNICEF, and one out of three children under the age of 18 have been sexually abused. In South Africa it is one in every 5,” Chopra said. “I heard a lot of this when I asked these government officials who said girls are asking for it,” she said.

It is so disturbing, the fact that so many children are sexually abused and no one seems to care. UNICEF along with Priyanka, however have taken a step forward to help these kids.

Priyanka also shared a story of a 7 year old girl who was raped; “The pastor of their church told her family that she was possessed and she should come and live with him … but the pastor raped her for two years. She was taken away from there and sent to another uncle and aunty of hers. The aunty then forced her to have sex with her husband, who was HIV positive. That was how she contracted HIV at age 17.” These stories have left us all upset and heartbroken.

She shared some of her pictures on Instagram feed as well: Not just that, the Quantico actress danced and played with the children. She also taught them the famous Indian ‘thumka’ as well. She also said that it was an eye opening experience for her when it came to meeting all the girls.