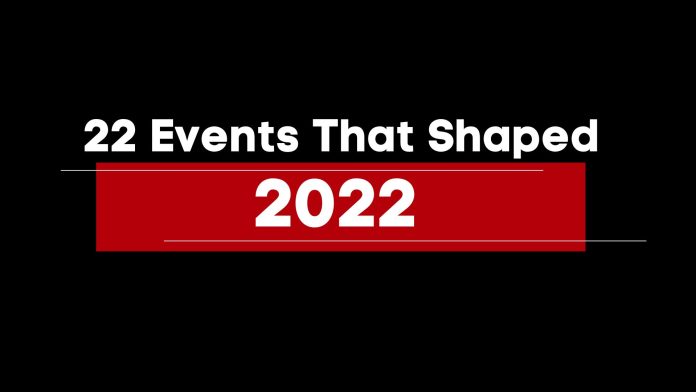 2022 is nearing its end making way for 2023. It was quite an eventful year that saw some of the world’s greatest conflicts come to the surface, some positive steps taken by the world authorities towards the climate, sports tournaments that kept the sportsmanship of every global citizen alive and so much more.

To read in detail about these news events, scroll down!

The Tata Group completed its full and final purchase of Air India in January 2022. It made a successful bid of Rs 18,000 crore to buy the airlines in October last year.

Tensions escalated between Russia and Ukraine in February 2022 pushing both countries to war. Russia wants Ukraine on the basis of shared history and culture whereas Ukraine wants to remain independent. The conflict is still on.

In an astonishing achievement, the world installed enough solar panels to generate 1 terawatt (TW) of electricity through solar energy. Moving forward, research suggests that dozens of terawatts of solar energy will be required to decarbonize the earth’s electricity, transportation, heating, and industrial processes.

After COVID-19, the world saw an outbreak of a ‘potential pandemic’ disease, Monkeypox or Mpox. The first few cases were reported in May from countries in Europe and North America.

The Government of India launched the Agnipath Scheme on the 14th of June to benefit Indian youth aspiring to serve the Armed Forces. It is a recruitment scheme that seeks to recruit the country’s young individuals into the Armed Forces for a period of four years.

BJP’s Droupadi Murmu became India’s new and 15th President. She took the Presidential oath on the 25th of July. Draupadi Murmu is the first female from the tribal community to become the country’s president.

In one of the most progressive rulings on relationships, the Supreme Court of India widened the legal definition of a family by including unmarried and queer couples.

India became the fifth-largest economy in the world, overtaking the United Kingdom. Currently, India is among the fastest-growing major economies in the world.

Artemis 1: Once Again On The Moon

On September 8, 2022, Queen Elizabeth II passed away at the age of 96. Britain’s longest-reigning monarch ruled for 70 years and left behind a remarkable legacy.

Protests erupted in Iran against the morality police in September after the death of a 22-year-old woman. She was brutally beaten by the police for allegedly violating the country’s strict hijab rules.

On September 17, 8 African cheetahs were released in the Kuno National Park in Madhya Pradesh, after being relocated from Namibia. This project was aimed at restoring the cheetah population in India after becoming extinct in 1952.

Launch Of 5G in India– (October)

5G was successfully launched on October 1. Airtel and Jio are currently the only 5G network providers. The entire country is expected to get 5G access by 2024.

After Boris Johnson, two promising candidates, Liz Truss and Rishi Sunak rose to the top for Boris’ position. Although Liz Truss initially won the elections, she soon resigned after 45 days in office. Rishi Sunak then became the new PM of the UK.

In October, Elon Musk acquired Twitter becoming the company’s CEO. The process began at the start of the year itself, but it took till October to complete.

The BCCI announced a “pay equity policy” offering the same match fee for India’s male and female cricketers. India is now the second country in international cricket to do so after New Zealand.

The 2022 COP27 was held from 6 November to 18 November 2022 in Sharm El Sheikh, Egypt. It was the 27th UN Climate Change Conference, one of the most historical conferences, due to the loss and damage fund announcement.

The world welcomed Vinice Mabansa of Manila, making her the billionth person on earth.

With her birth, the world’s population rose to 8 billion which has been primarily driven by the developing world.

Billionaire industrialist Gautam Adani’s Adani Group took over NDTV, one of India’s first and largest private producers of news. Established in 1988, NDTV was founded by Radhika Roy and Prannoy Roy. It has had a reputation for being anti-establishment.

On December 1, 2022, the Reserve Bank of India launched its digital currency/rupee pilot, taking a huge step forward toward making India a cashless economy. e₹-R or e-Rupee is the electronic version of cash and will be primarily meant for retail transactions.

2022 marked a historic year for India in terms of international recognition, as it assumed the presidency of the G20 (Group of 20). It also hosted the first meeting of the Development Working Group in Mumbai.

The 2022 FIFA World Cup Final took place at the Lusail Stadium in Qatar. The two teams in the finals were Argentina and France.
Argentina won while also creating history for Lionel Messi as it was his last World Cup.

The Brazilian football player Pele breathed his last at the age of 82. He was battling cancer as well as kidney and heart problems. His daughter, Kely Nascimento, announced the news of Pele’s death through a post on Instagram.