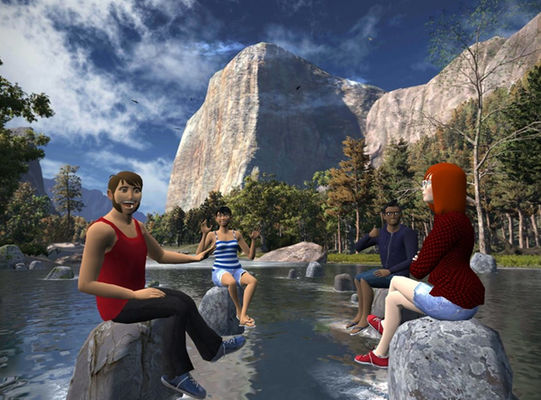 Virtual Reality Application is a new app out in the market that helps you make virtual friends. Through the VR App you can sit on your couch and interact, talk and share your feelings and loneliness, instead of going out and actually meeting with friends. The whole point of this technology is to eradicate loneliness and give the user different experience of exotic locations.

For the lovers of technology, it’s a great achievement to fulfil the dream once thought impossible. Meeting new people is never an easy task, but with the increase in dating applications, websites and various other methods it has been simplified now.

A new virtual reality app ‘vTime’ lets users socialise and chat in real time with friends in virtual reality at 12 destinations. Among the environments shown, where up to four users can meet in VR, are an arctic campfire, a dinner party in Paris, a forest setting, a private jet in transit, a mountain climbing rig, a tropical beach and even an outside space station meeting. Users can customise avatars, make new friends and take selfies. Compatible with Google Cardboard and Samsung Gear VR headsets, the app allows direct access from phones. The Gear VR version of the app was launched in December, but now the company is welcoming in limited users for early access to the Google Cardboard version of the app.

We’ve reached up to a point that meetings are done over the technology. We are already spending half of our time using smartphones, laptop and other ways of entertainment and communication. And in addition to existing ways of communication, the launch of VR is no more than a tight slap to our messed up life. The technology is not only controlling our life, but dictating how we should be living. We have to realize that we are losing touch with the reality.