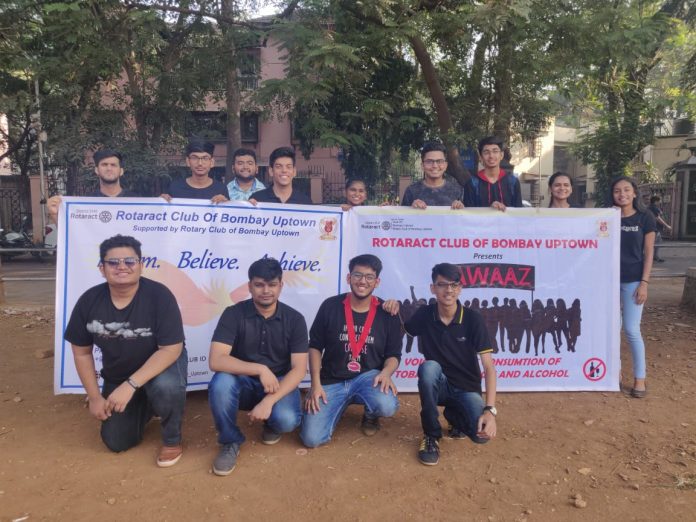 Tobacco and alcohol consumption is a serious concern for many parents considering that it’s addiction has engulfed a majority of the young. Many educational institutes, governments, and NGOs have taken steps to raise awareness about the harmful effects of alcohol, tobacco, drug or any nicotine products on human health. With this motive in mind, the Rotaract Club Of Bombay Uptown had conducted a rally on 7th December 2019 in which more than 1000 students from 10+ schools had actively participated.

Awaaz, a project by the Rotaract Club Bombay Uptown is in its third year of raising a voice against the consumption of alcohol and tobacco through a  rally. This year the rally was 2.5 km long and began from Dadar East Five Gardens early at 8 am in the morning. The students were seen carrying placards and voicing slogans against the use of alcohol and tobacco. They were successful in attracting the attention of pedestrians and making their point clear and loud.

The President of RCBU Devansh Savani (Rotaractor) and Vice President Harshavardhan Shah (Rotaractor), in an interview with Youth Incorporated, said that the main motive behind including school going students in the rally was because the teenagers are more susceptible to alcohol temptation and addiction especially when they hit teenhood. Taking this into consideration, they chose a lower age student group so that before these students hit teenhood, they are already aware of the dangers, alcohol, and tobacco poses on human health.

The rally was wrapped up by students gathering in the ground at Five Garden where all of them shouted the slogans. To know more about the success of the Awaaz rally, click on the link below.