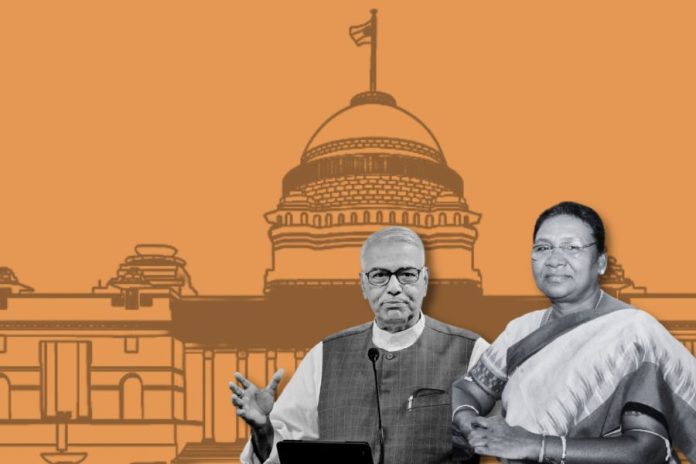 India is soon to conduct its 2022 Presidential elections as the Presidential term of Ram Nath Kovind nears its end. The candidates contesting elections have sent in their applications and the stage to vote for India’s next President is all set. The voting is going to be conducted on 18th July and the counting of the votes is going to take place on 21st July. After the term of Ram Nath Kovind ends on July 24, a new President will be sworn in on July 25.

A total of 15 candidates filed their papers for nomination for the 16th Presidential elections, out of which four were rejected due to lack of proper documents. The final day to file the nomination is 29th June, following which the Election Commission will scrutinize the applications on 30th June. The list of 11 applicants includes:

In addition to this, big political parties have also revealed the names of their candidates. The opposition parties including Congress, Trinamool Congress (TMC), and Nationalist Congress Party (NCP)  have jointly announced former Union minister Yashwant Sinha as their candidate. The NDA on the other hand has announced a 64-year-old tribal leader from Odisha named Droupadi Murmu. She is the former Governor of Jharkhand. If elected, she will be the first tribal woman, the second woman ever in India, and also the youngest born person post-independence, taking on the Presidentship of India.

The Presidential elections are conducted by the way of indirect elections held by an electoral college. The college consists of members from both the Houses of Parliament as well as members of the legislative assemblies of all the States and Union Territories.

A total of 4,809 members make up the electoral college. An applicant requires fifty members of an electoral college to propose their name and another 50 to second the nomination. Those applicants who fail to get 50 proposers will eventually bow out.

NDA’s candidate has already secured 50% of the vote share and is also going to receive support from some regional parties including the AIADMK, and the YSRCP.

BJP’s strength in the Rajya Sabha is 92 after the results of the just-concluded Rajya Sabha elections. Further, it has a total of 301 MPs in the Lok Sabha. Further, a commendable victory of the ruling party in four assembly polls, including Uttar Pradesh, only adds to its overall advantage.

This number game is speaking positively of the victory of NDA’s candidates in the Presidential elections although nothing definitive can be said.

The Presidential elections of India hold immense relevance for the nation. The President of India is the head of the Indian state. The term of their office is 5 years. They are entrusted with ensuring that everything in the country runs smoothly. They hold the responsibility and authority to protect the Constitution.

The day of getting a new President for India is approaching. The nation awaits to welcome its next President.