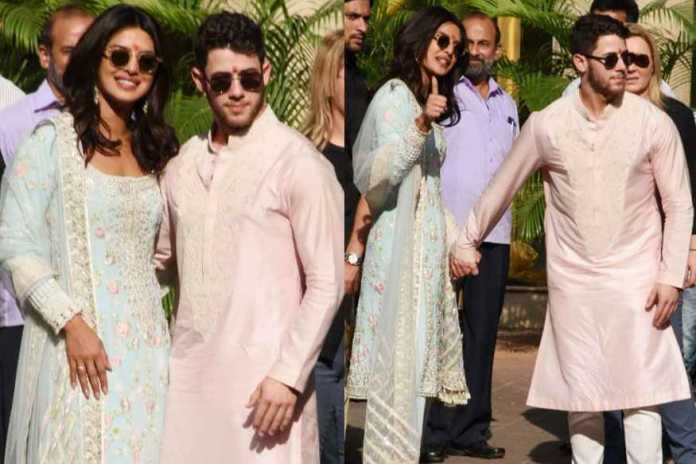 Priyanka Chopra and Nick Jonas are all set to become man and wife at the iconic Taj Umain Bhavan Palace in Jodhpur. The festivities will reportedly begin today and carry on till December 2nd, and given the famous faces we’ve seen arriving for the wedding, it may as well be the wedding of the year!

Guests arriving at the palace will be greeted with a number of welcome goodies, including an ‘Information Guide’. Although the exact contents of the goodies aren’t known, a video circulating online is a clear indicator of how elaborate the celebrations are going to be.

The three-day-long extravaganza includes pre-wedding functions such as a mehendi and sangeet ceremony, haldi ceremony, and a cocktail party. The duo will tie the knot in two ceremonies, one in the traditional Indian way, and the other in a Christian ceremony officiated by Nick’s father.

Although it is unclear who is designing the couple’s wedding trousseau on all days, reports suggest that PC will don a Ralph Lauren number for the Christian ceremony. Lauren has reportedly only designed wedding dresses for his daughter, daughter-in-law, and niece in his life. Nick will sport a bandhgala, wear a turban, and carry a sword and ride to the ceremony on a horse. In case you’re worried if ‘jiju’ will be comfortable on a horse, he told Vogue USA that he “can’t wait”.

The guest list is just as star-studded, and includes Hollywood hotshots like Dwayne ‘The Rock’ Johnson, Kelly Ripa, Lily Singh a.k.a iiSuperwomanii, Lupita Nyong’o, Chopra’s Quantico co-star Yasmine al Masri, among others. Apart from Parineeti Chopra and VJ Anusha, it is unclear which Bollywood celebs will grace the festivities.

Nick proposed to PC on a birthday trip to Crete, where he got down on one knee with a Tiffany ring (he shut down an entire Tiffany store in London to buy it). PC took 45 seconds to say Yes! No joke—she took about 45 seconds. Forty-five seconds of silence. I said, ‘I’m going to put this ring on your finger now unless you have any objections’.”

Commenting on her Big Fat Indian Wedding, she said “People will need vacations after this wedding.”