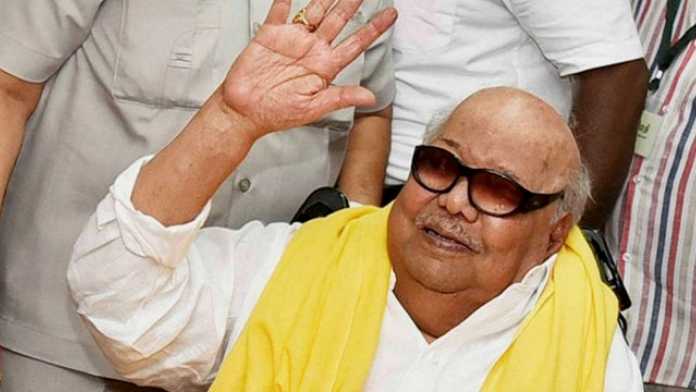 Muthuvel Karunanidhi (M Karunanidhi) was Born on 3rd June 1924.  A name that ruled the state of Tamil Nadu for 5 terms and 20 years. He was a renowned scriptwriter whose stories in both movies and theatre, changed the way people looked at stereotypes.

He also believed that films were the strongest medium to reach out to a mass audience, in 1950 he made a movie titled Parashakti which strongly promoted his Dravidian movement belief. The movie was a huge hit at the box office when it came out in the year 1952, and he became popular among the Tamil speaking community.

Karunanidhi never feared the society and always made a strong impact, be it through his movie and plays, or through his political beliefs and policies. DMK as a party was successful in washing out the Congress rule in Tamil Nadu in the year 1967, after the death of C.N. Annadurai, M Karunanidhi not only took over from his mentor as the party chief but also became the Chief Minister of Tamil Nadu in the year 1969. He was a hero to the people of Tamil Nadu, having seen various political ups and downs in his life, it is from M Karunanidhi that we learn on how to not give up and most importantly on how to “Script” our own victory story as a ‘Hero’. The party faced a major backlash during the 2g spectrum scam, where they handled the national telecom department.

During his 5 terms being the Chief Minister of Tamil Nadu, he had made it next to impossible for any nationalist party like Congress and BJP to enter into the State. The rule remained rigid even after he left the office as a Chief Minister in 2011. The Political Vacuum created by the death of first Jayalalitha and now DMK leader M Karunanidhi has not only been a setback for once huge Dravidian Movement but also in the leadership position in the state of Tamil Nadu.

Despite his years-long stint in Politics, and being the head of DMK for exactly 50 years, Karunanidhi never let go of his passion, Scriptwriting. The profession that gave him his first shot at fame. Not only in Tamil Nadu but even at the Union Government, he was greatly powerful. DMK has been a loyal friend to both BJP and the Congress party. DMK’s alliance with UPA and NDA was the driving for in making Atal Bihari Vajpayee the Prime minister in 1996, and Manmohan Singh in 2011.

With M Karunanidhi now out of the picture, it is also believed to be a golden opportunity for BJP and Congress to make a re-entry into the State and collect some major vote share. However, Kamal Hasan and Rajnikant are also believed to take an advantage of the freshly created political vacuum in the state. As the 2019 elections come closer, DMK will be on the election ground without Karunanidhi as their leader for the first time, and it will also be interesting to observe who will the party support now – will it be Congress? Or BJP? Only time will tell.