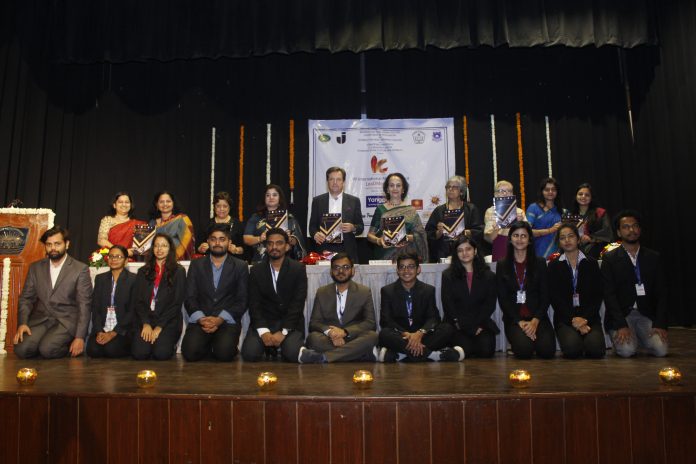 The Department of Mass Media, Kishinchand Chellaram College organized its 7th International Media Summit from February 13-15, 2020. The three-day conference was organized in association with Bombay Teacher’s Training College and Jönköping University, Sweden. The interdisciplinary conference encapsulated the theme of Learning, Digitalization and Media (LeaDMe) and had partnered with some eminent leaders like Youth Incorporated-one of the leading youth magazine in Mumbai, India as their Youth Media Partner.

Learning Digitalization and Media International Conference was conceptualized as an initiative for a theoretical research-oriented conference meeting (13-14 Feb, 2020) and a cross-sectorial platform (15 Feb, 2020) that brought together various sectors and professionals engaged in the enterprise of education, digitalization and media. Communication, Culture and Diversity(CCD) research group which comprises of researchers from across the world played an important role in the formation of this academic initiative.

Speaking about this initiative, Dr. Hemlata Bagla, Principal of KC College said, “The conference has grown bigger this time as we associate with two other leading academic institutions, Jonkoping University (JU), Sweden and Bombay Teacher’s Training College (BTTC). An amalgamation of cross-faculty hailing from media, communication and education schools will cover the comprehensive aspects and give a new definition to learning.”

The chief guest for the valedictory ceremony of the conference was Mr. Sachin Kalbag, Executive Editor of Hindustan Times. In his valedictorian address, Mr. Kalbag spoke about the never-changing principles and purpose of journalism in the age of digitalization. He said, “The sole purpose of journalism is to convey the truth and facts. Every media professional should stick to basics and be truthful when reporting stories.”

The chief guest of the inauguration ceremony was Mr. Alessandro Giuliani, MD, SDA Bocconi AC, Mumbai. He highlighted the changing landscape of industries across the globe and spoke about how digitalization is impacting the businesses everywhere. The keynote address for the Conference was given by Dr. Coomi Vevaina, Education Futurist, Creative Writer and Founder  Director, Centre for Connection Education and Management.

A Pre-conference session was conducted by Sue Sudbury, Documentary Filmmaker and Faculty of Media and Communication, Bournemouth University, the UK which involved screening of a documentary named, ‘Indian Space Dreams’ directed by her followed by a discussion on the film on Feb 12th, 2020.

Around 35 delegates from Sweden, India and the UK presented their research papers in this three-day-long conference. Papers on topics like online learning, digital media and public participation, pedagogies for e-learning, storytelling in and across media, etc. One of the highlights of the conference was a cross-sectorial session that bought together industries, academia and social organizations to discuss issues beyond institutional framings. Students from media and teachers’ training colleges attended the International Media Summit.

The conference was an enriching experience as it provided students and participants with a platform to interact and learn from the maestros of the media and education domain.

About Kishinchand Chellaram College and Department of Mass Media:

KC College was established in 1954 under the aegis of the Hyderabad (Sind) National Collegiate Board, H(S) NC Board. It won the ‘Best College, (Urban Area) Award’ by the University of Mumbai in January 2015. The college strongly believes in using innovative methods of learning for the benefit of its students. This is evident from the fact that the Department of Mass Media has been ranked among the top 10 colleges for media courses in India by the India Today Magazine, and is fortunate to have some of the best people from the industry to be a part of their programs – Bachelor of Mass Media (BMM), BA in Films, Television and New Media Production (BA-FTNMP), Masters in Communication and Journalism (MACJ) and Masters in Entertainment, Media & Advertising (MA-EMA)