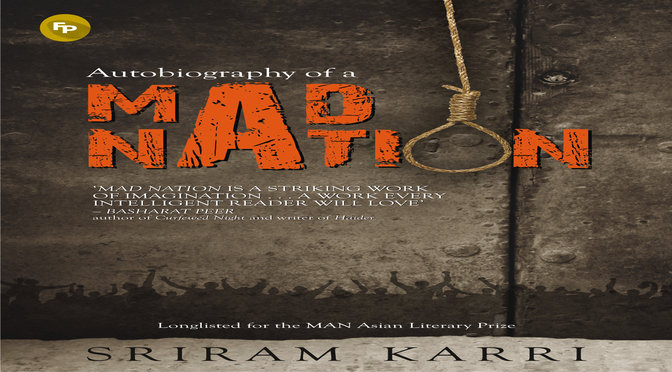 Witty and well-read Sriram Karri is out with his next novel: the powerful and intriguing Autobiography of a Mad Nation, a story of patriotic friends in a nation that is descending into madness. In an exclusive interview with Neeti Vijaykumar, he opens up about what drove him to write this masterfully told tale, about journalism in India, and the need to “read better, demand better as consumers of art and don’t compromise for the drivel of Bollywood, or its equivalent in writing – your soul needs some food.” Excerpts:

Where did you get the idea to write Autobiography of a Mad Nation?

It was a random statement made by me one day at a public discussion – I was born in a mentally retarded country.  I felt it deserved more; that it had weight to start a book. The title of the book sprung from it naturally; but together, they did not have enough to make a book.  But to create a theme strong enough to create a novel worthy of intelligent readers, I had to bring in another statement – if I had to choose between betraying my friend or my nation, God, give me strength to betray my country. This gave me the theme. The plot had to do two things – more than a plot alone, I had to create a literary device – wherein, the book would on one hand be a racy murder mystery and political serial deaths and an investigation. On the other strand, like a DNA helix, was an intellectual series of essays, a reflection on India’s history between Emergency to Godhra. All along, it was necessary not to weaken the plot or flow of story by the temptation to analyze history or politics. I borrowed heavily from several classics to create the structure such as Ayn Rand’s Atlas Shrugged and the story of friends, but keep them hidden till later; and start the story from another set of protagonists, before unveiling the heroes. It was fun because it was so complex, and when successfully completed, the simplicity is beautiful to read. Sorry, I cannot say good things about my own book, right?

I see no contradiction. In that sense, I like the spirit of Prime Minister Narendra Modi’s statement in Seoul – people used to be ashamed of being born in India, now they are proud to represent it. I am not supporting him, merely the nature of his statement – a transition, a pride born of seeming shame, not to be taken literally. In that sense, maybe he was quoting my spirit of saying – I was born in a mentally retarded country.

The madness has hope, the hope has madness – we contain contradictions – we are the multitude. It was fun and frustrating to be born and to grow up in a mad nation. When the nation came at you – like during the 1984 Anti-Sikh riots, or Godhra, anti-Mandal agitations or Mandir-Masjid riots – you wonder why it is so easy for civilization to go on a vacation in India. But otherwise, it was fun.

You began your career as a journalist, and also worked as a corporate brander. How did your career span assist in you writing?

It kept me going, paid the bills, allowed me to read and dream on. It kept me angry and frustrated enough to want to go back to writing after a tough day or week of work. It taught me details of planning and discipline to focus on deadline and try and keep them as much as possible. It showed me that success was possible after a long struggle.

But otherwise, these were independent identities and lives at large. Felt like superman in that sense – day job of a journalist or tech brander – post work, the secret mask as a novelist.

Can you tell us about one incident that led to your decision of writing ‘The Spiritual Supermarket’?

I had finished a novel – One Good Shot – which was never published and wanted to do something different. Why not a bit of genre defiance – not fiction, not non-fiction – more like an intellectually challenging political essay. The Spiritual Supermarket was born like that – treat the world as a supermarket, allow only four companies to sell products in it – and these are Religion, Reason, Politics and Violence. God was Religion’s greatest product – and Nation was the response of Politics. Now imagine, these companies operate like modern day corporate – alliances, mergers, subsidiaries, secret tie-ups, competition, attempts to hijack a competitor – human history was suddenly fun and easy to understand when you saw 9-11 as a mere Joint Venture between Terrorism subsidiary of Violence, Inc. and Religion Conglomerate – and the War Against Terror was also a JV of Violence.

As a journalist, what do you think are the cardinal sins of journalism? Also, can you also tell us about the ethical issues in the way of Indian journalism?

Opinion over facts and the desire to give opinion and commentary by journalists and having open political affiliations are some of the key cardinal sins. The second is the writing – look at the number of clichés a single newspaper report in India has – and you know most journalists think in clichés. The biggest ethical issue to me is not corruption amongst journalists – which I still feel is largely a clean profession within a larger national context – but intellectual mediocrity. They just don’t read enough, understand things clearly enough or care enough to go beyond comfort zones. The fact that most newspapers are the same in over 80% of content – the homogenization of intellectual viewpoint, ability to look around and find something out of normal sight – these are sad limitations. I also feel angry about the domination of politics, violence, cricket and Bollywood in news – like there is nothing else that makes India.

Are you articulating your reaction to the nation and its people’s actions through your writing? Is it something personal or just fiction?

What message are you trying to convey through your book and your writing in general?

Read better, demand better as consumers of art and don’t compromise for the drivel of Bollywood, or its equivalent in writing – your soul needs some food. Find it in great writers like Victor Hugo, or Dostoevsky, O’ Henry and don’t settle for less.  Great stories are more important for your personal sanity and being human than anything else. Listen to great music, see great paintings, observe great sculptures – to me the fall in standards of art and aesthetics in India – is far more damaging to the country and its people than the fall in ethics. My problem is not you tolerate bad politicians as much as the way you tolerate bad writers, and movie makers.

What would you like to tell our young readers about creating literature?

Unlike anywhere else or any other aspects, don’t compromise. Demand the best and seek nothing less – it is amazing how easily this will permeate to every aspect of life.

You make many references to Rushdie and Orwell. Are they your favourite authors? Who else do you enjoy reading and take inspiration from?

The book has references to many writers – Dostoevsky, Oscar Wilde, Rushdie, Camus, Kafka, Salinger, Alexander Dumas – a very long list and I loved their writings. I read a lot, but my inspiration is largely the Romantic School of Literature, especially Ayn Rand.