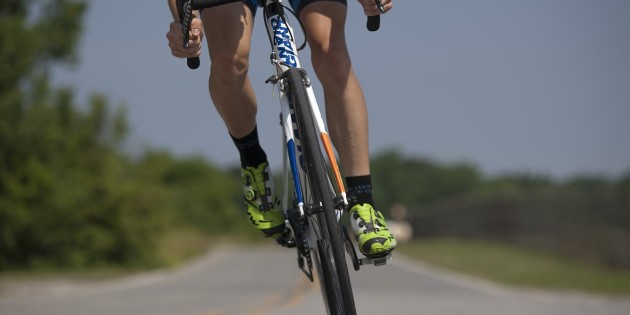 Ever feel like inspirational quotes are just there to taunt you?

Imaginary Henry Ford: Poor Taylor. If only you were enlightened like me things would be easy.
Taylor: Thanks Mr. Ford! I’ll get right on it!

Henry Ford’s message above is one I believe to be a universal truth yet I constantly grapple with in its application.

Trying to out-smart my own self-talk can be a futile endeavour.

This weekend I’ll be participating in the Pan-Mass Challenge, cycling 192 miles in two days to raise money for cancer research and treatment at the Dana Farber Cancer Institute.

When I first did this ride in 2002 I was mildly terrified.

Enough that I spent all summer assiduously preparing. Enough that I stayed up half the night before listening to the fan and wondering how I would survive the day.

I did survive and I completed the ride. But it beat the heck out of me.

By contrast this year will be my 12th Pan-Mass Challenge and I’m not even slightly worried.

I don’t say this to brag.

I share because it’s most obvious example in my life that Henry Ford is right.

So what changed from 2002 to now that what was once miserable and daunting is now fun and relatively easy?

In short, the context.

1. I recruited a few dozen close friends and family to ride with me. That turned the event into a big festive reunion.

2. Plus, instead of gritting our teeth and acting like we might not make it, we have an informal competition to see who can get the most high fives through the course of the weekend. (As a general rule children count for more points than adults.)

3. Three years ago we even teamed up with a six-year-old named Tre’son who’s been in and out of chemo since we met him. He and his family are meeting us at the Day 1 finish line and you can bet that we’ll be more focused on giving him a day to remember than on our petty complaints!

So you see, even if it rains (last year it was torrential for 4 hours), even if it’s 95 degrees (at least twice I can remember), even if they run out of PB & fluff sandwiches (never so far, thank god), this weekend is going to be a blast.

You can’t always bend your mind to your will.

But you CAN change your context.

The story above illustrates a few easy strategies to do that:

Last but not least: Focus on giving.

Giving high fives, encouraging team members, thanking bystanders, appreciating volunteers — there’s an abundance of ways to give during this event. Focusing on serving and giving practically makes my own woes disappear.

How can you re-orient your moment-to-moment focus toward giving?

“My team along with a cancer survivor at mile 150. I’m bottom right.”

A version of this article originally appeared at TeamPossible.co