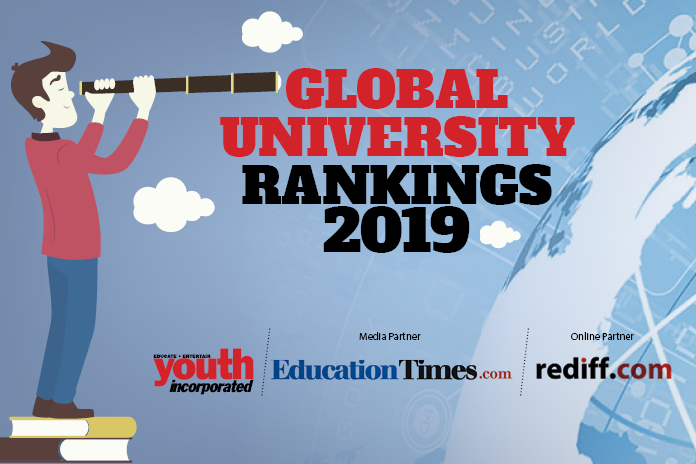 College admissions are no joke, and with the number of options at your disposal, you are bound to be overwhelmed. Which is why we at Youth Incorporated, took it upon ourselves to give our readers an overview of the best colleges to pick from. After having conducted extensive research by contacting 2450 institutes and over 9500 recruiters around the world, we bring to you the top 100 universities in the world to pursue an undergraduate programme.

Welcome to the Youth Incorporated, Education Times and Rediff.com Global University Rankings 2019. Continuing with our yearly rankings for the best global universities, we have conducted a thorough research across several months to sort through extensive raw data and bring out a practical analysis that can be helpful in the selection process for students looking to enrol in the top programmes around the world.

We got in touch with 2450 institutes and recorded their unbiased responses to questions that would assist us in evaluating the quality of the educational experience provided by them. We also took into account the responses from current students attending the universities, along with official responses from their respective administrative bodies. In order to make our rankings more relevant and credible, we accumulated responses from alumni of the institutes, and procured information from 9500 recruiters that have previously recruited graduates from the institutes considered in the surveys.

Once the adequate amount of data was gathered, we broke down the information by placing emphasis on the most important criteria a student considers when taking admission at an institute. We largely considered factors such as value for money, student and recruiter satisfaction, infrastructure and facilities, teaching methodologies, and much more. This conscientious method was employed by us to bring out the rankings of the top 100 universities worldwide. We were also able to provide rankings based on regional distribution and streams of study such as engineering, business, arts and humanities, pure sciences, and architecture. To give the readers a holistic view of how a particular institute has fared over the years, the ranking for this year was placed against our previously conducted annual rankings. We hope our in depth survey will guide students in making the right choice, yet again!

Placing the 2019 rankings against those we’ve conducted over the years, a comparison of the performance of institutes in the previous years is evident. Harvard University yet again manages to retain its pole position with a consistently perfect score. This year’s 2nd position took us by surprise, as the Massachusetts Institute of Technologyrose considerably to the top and took 2nd place for the first time ever. The University of Pennsylvania, which managed to maintain its position through the years, fell to the 3rd place this year.

The American institutes have yet again dominated the top 10 category. Among the Asian institutes, The University of Tokyo is the only one to have made it to the top 20 this year, also rounding off the category.

As is evident, most universities in the top 100 seem to show a consistent performance with similar rankings.

The 2019 Global University Rankings recorded a decline for most Indian universities. The four universities which make the cut every year are still the same, and we haven’t seen any new additions. IIT Bombay, which maintained itself in the top 20 till last year, hopped out of the category to the 21st position. IIT Delhi showed considerable progress from last year’s 29th rank, to being at the 25th rank this year. IIT Kanpur, which took a leap to the 60th position last year, fell to the 62nd rank this year. The University of Delhi, which made a remarkable jump to the 75th position last year, fell one rank short to the 76th rank this year. For a country that bases its youngsters’ success on education, India certainly needs to focus more on the growth and development of its educational institutes.

We chose institutes across the world after having discussions with thousands of students, recruiters and faculty. Youth Inc’s Research Unit (YRU) also studied domestic rankings in various countries to find the best institutes.

We sent survey links to 2450 institutes and provided them with unique codes so that they could submit their responses online. Institutes were also provided links to online surveys where their current students were asked to rate specific statements that pertained to the factors considered in this ranking. Institutes also sent separate survey links to their recruiters who in turn rated the institute’s career management cell as well as student employability.

Over 9500 additional recruiters were sent emails with a survey link. The recruiter list was prepared from the responses of the institutes and also included internationally well-known recruiters.

Below are the factors we considered and the overall weightage assigned to them:

This category significantly impacts the overall score of an institute since it is the most weighted factor. One of the most important criterions to select institutes is the student’s industry viability after graduation.

Recruiters were asked to list and rate the institutes that they were most likely to recruit from. They were asked the likelihood of recruiting again from the same institute and their satisfaction with the institute’s career cell. Recruiters rated students on various factors including analytical and problem solving skills, leadership potential, communication and interpersonal skills and so on.

Institutes, students and alumni were also asked about the availability and functioning of a career service cell on campus and how active such a service was. We also considered what percentage of students were actually placed, both domestically and internationally, through the institute’s career service cell. Students reported the availability and ease of obtaining internships.

Institutes were asked to report the total number of students on campus and what percentage of the students were international and speak two or more languages. Gender diversity of the students was considered.

Institutes also reported the percentage of the faculty that were international, hold a doctorate degree and accredited with their own publishing material along with the gender diversity of the faculty.

Students and alumni were asked to rate the student and faculty diversity in their class.

This category looks at the innovation used to construct and teach programmes and how faculty engage the students; an important factor in the overall perception of an institute.

We considered the different ways in which an institute constructs programmes. Institutes were asked to select from a list different teaching methodologies that we considered innovative – some of these included company visits, dual or multiple majors and course collaborations between different departments at the institute. Our list was made after surveying students across different campuses worldwide.

Students were asked to report how satisfied they are with faculty who use innovative ways to teach subjects.

This category considers the support students receive on campus and the availability of extracurricular activities. The exchange programmes offered by the institute and how actively students are encouraged to opt for such programmes was also considered.

We asked the institutes to select the different types of assistance provided by the student office or a similar body on campus. Our initial list was selected after surveying students across different campuses worldwide.

Students and alumni reported if they were encouraged by the institute to participate in different extracurricular activities on campus.

Institutes were asked to report the percentage of students that opted for exchange programs. We also considered the exchange students present on the institute’s campus.

This category takes into account a critical part of college education today – finances. And more importantly, how satisfied a student is with the institute.

We considered students’ opinions on whether a particular institute was perceived as ‘value for money’. We also asked institutes to state the percentage of students who received some sort of funding from the institutes.

We calculated the standard deviation and standard scores (Z scores) so that we could combine and analyse the data with more accuracy and reliability. Below is a summary of the factors and the weightage given to each factor when we ranked the institutes. Each factor was made up of a set of questions. The total percentage attributed to that factor was based on the average score of the responses multiplied by the assigned weightage. The total scores were then sorted from highest to lowest. The institute with the highest score was ranked first.

After we calculated the total computed scores for the institutes, we subjectively analyzed the data provided by the institutes, current students, and recruiters. If we found discrepancies in the satisfaction scores and the subjective descriptions, we omitted the data. This happened in the case of 7 institutes.

In a few rare occasions, some institutes did not supply data for all the questions in the survey. When data was missing which affected factors which were low-weighted such as value for money or campus support, we entered an estimate between the average and the lowest value reported by the institute.

By following such a practice we did not excessively penalise an institution with a ‘zero’ for data that it could not provide. At the same time, the institute was not rewarded.

We required that at least 20% of the class size (of any specific institute) answer the student survey. Hence, some institutes were disqualified from our ranking because of rack of responses to the student and/or alumni survey.