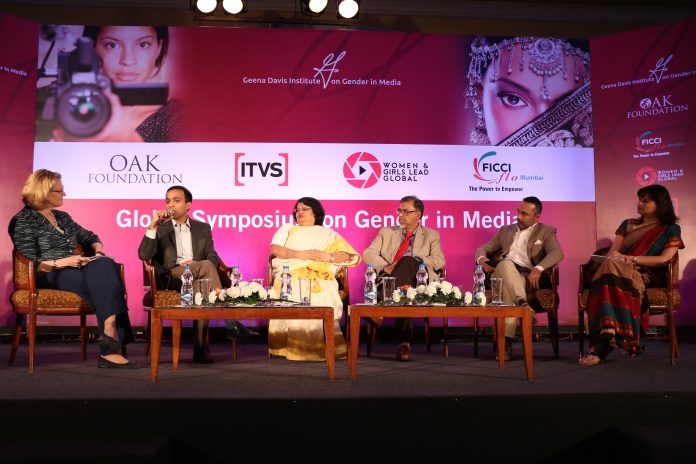 Ahead of the three–day FLO Film Festival organised by FICCI Ladies Organisation, the Geena Davis Institute on Gender in Media, in partnership with ITVS and Women and Girls Lead, hosted a Global Symposium on Gender in Media on February 17, Wednesday, at the ITC Grand Central in Parel. The symposium that brought together eminent content creators, business leaders, actors, directors, media personalities and policy makers for a dialogue on gender issues also culminated in the release of a powerful report on ‘Investigation on the Impact of Gender Representation in Indian Films’.

Founded by Academy Award winning Actor Geena Davis, the Institute is the only research-based non-profit organisation within the industry that works towards dramatically improving gender balance, reducing stereotypes and creating diverse female character in media.

The research study, funded by the Oaks Foundation, released during the symposium focused on answering three major questions pertaining to the media. The three questions were as followed.

“India takes pride in having a large number of women entrepreneurs, but only 10% of the businesses in the country are run by women”, said Dr. Archana Garodia Gupta. “Women participation in society has decreased from around 40% in the 1990s to 27% today. These statistics beg the need for us to shake the cultural norms, where it is alright for women to go out and work”, she adds. She also said that they way to change this is to reach out to the women who stay at home as a status symbol. “Creating role models in your own neighbourhood apart from the role models we see on TV can help exponentially in this cause. Women need to be seen as being economically valid,” she adds.

Dr. Abhijit Das had a revolutionary view on how to solve the issue of gender inequality in the country. He says that we need to get in touch with the men who are facing troubles because of the gender inequality present in the country. “We need to engage men and get them into the conversation,” he says. “We need new role models of men as friends, fathers and brothers. To get men in general involved in the conversation, second hand stories that allow reality at a distance can be used; as first hand stories get too personal and don’t work. The starting point to engage men across the country into the conversation would be to find a creative way to bring the men who have suffered die to the skewered relationship between men and women, like the male relatives of female victims.

Actor Rahul Bose had a completely different view on the impact of films on gender equality. He started off by giving an example of Los Angeles, the city producing the most number of films in the world. He said that LA produces the most number of films with people smoking in the world too. But nobody in LA smokes. This is because the government targeted school-going children and made smoking uncool, instead of targeting the Film Industry. “If you have to solve a 360 degree problem, you can’t beat up just one angle”, he says.

Overall, the event was a must-visit, and we are hoping the government as well as the media and film industries take notice and together, we can change the current situation of gender inequality in the country.