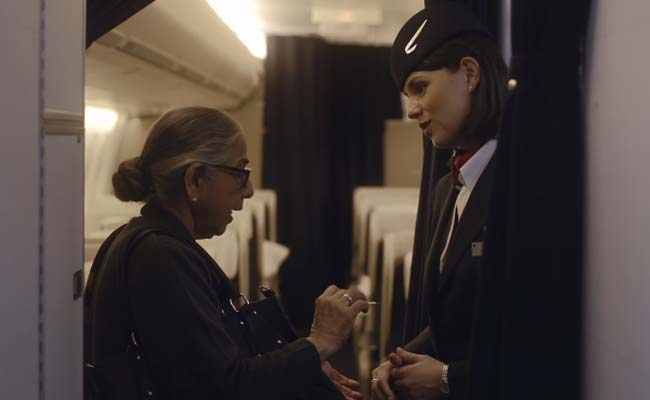 Did you see the new commercial of British Airways? The touching ad is about Helena, an air hostess who fancies the motley culture of India and later forms a special bond with the country. While at the plane attending the passengers, she meets an Indian senior citizen, Anandi who is travelling to Hyderabad, India alone. She assists her in putting the seat belts to wearing socks and in this one moment when she is missing her son, Helena also comforts her. Impressed, the old lady invites her home for a special meal and presents her a beautiful gift.

The commercial video by the British Airways is about the heartwarming Indian hospitality. Although it is a 6 and a half minute video which is quite long for a commercial, the viewers still seemed to love it.

It is directed by Neeraj Ghayan who is also an award-winning Indian film screenwriter and director of the film Masaan. The beautiful commercial about the journey of the air hostess to India got much media attention and has already gone viral on YouTube with 392,813 views.

The visual of the country’s warm hospitality and culture is the essence of the commercial. In the recent times Indian culture has been either wrongly stereotyped or criticized by the media, both foreign and national. However this video commercial shows the bright and adorable sight of our Land and culture.