Chinese singer Sun Nan welcomes the New Year on Chinese television in technological style with a troop of robots.

China has seen its glorious future and it is high tech and beautifully choreographed. Nothing says soft technology better than 540 dancing robots and 29 drones.

More than 7000 people all over the world tuned in to China Central Television’s (CTV)  Spring Festival Gala on the eve of the Chinese New Year. The Spring Festival gala is described as the world’s most viewed TV programme by its organizers, who are China Central Television station.  The most impressive part of this celebration was a fleet of 540 robots dancing in a synchronized routine with the Guangzhou’s skyline as a backdrop while famous Chinese singer Sun Nan performed his composition while being filmed by 29 drones overhead.

The robots are filmed in a way that they look bigger than their actual size, but it’s still a beautiful sight to behold. A translation of the song Nan was singing has not been made available in the video, but according to Chinese culture site Shangaiist, it was ‘about China catapulting itself to the peak of the world’, which would explain the drone-soaring finale.

We would definitely give credits to China for using its spring festival gala to show off China’s advancing technological power by putting on show with dancing robots. 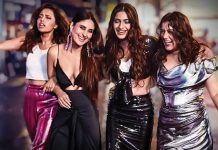