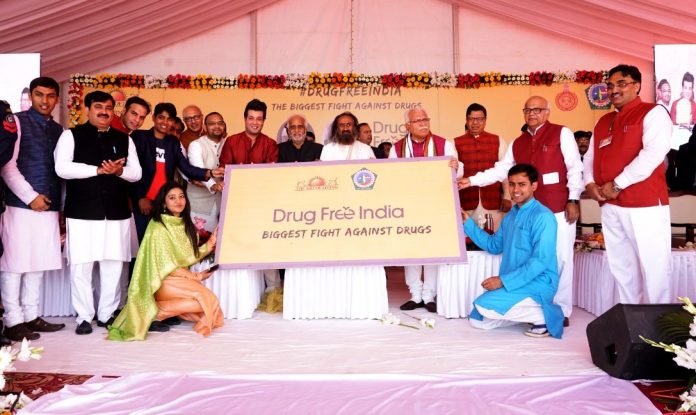 The ‘Drug Free India’ campaign, which is reportedly the largest of its kind, was launched at Chandigarh University on Monday where nearly 30,000 students took a pledge to stay away from drugs with the slogan, “Drugs na karunga na karne dunga”. Those in attendance included Art of Living founder Sri Sri Ravi Shankar, Punjab Governor V P Singh Badnore, pop singer Badshah, comedian Kapil Sharma and actor Sanjay Dutt among others.

These famous faces took to the stage to share their thoughts on drug abuse, and also encouraged students not to fall down this path. Sanjay Dutt spoke to the students about how his father sent him to the US for two years for a de-addiction treatment, which was a much needed wake-up call for him. “At the crack of dawn, I found myself starving. My mother had departed to her heavenly abode. I asked my servant to give me food. He told me that I hadn’t eaten anything for two days as I was asleep. Blood was oozing out of my nose and mouth. I was frightened to see myself and went to my father for help,” he said. He added that upon returning to India, he vowed to create a drug-free society.

Badshah, who has never been a drug addict, shared his encounter with a friend who was a drug abuser. “I was a student at Punjab Engineering College (PEC) and I had a friend who was a better rapper than me but he was a drug addict. I asked him why you are doing this to your life. He told me that it makes him more creative, but today here I am before you and he is no more,” he said.

Punjab Governor Badnore said that at one point, the people of Punjab faced terrorism at one point of time, and never imagined that someday Punjab would see a drug menace. ”Each and every person has a responsibility to shoulder. If any of your friends is showing abnormal signs, you should report,” he said, adding that many drug addiction centres have been opened in Punjab.

“When warriors from Punjab could fight the conquerors or invaders and protect our motherland, it is the duty of the youth today to wage a war against the menace of drugs,” said Kapil Sharma in his address to the students.

The event was live-streamed across 12,000 colleges and universities in the country. The following day, PM Narendra Modi addressed the students of Guru Jambeshwar University at Hisar via a video message. “Drugs are not cool. It is a big misconception that drugs are a style statement,” he said. He also added that as per estimates from the WHO, almost 3 crore people are suffering from drug addiction, and it is alarming to see so many youngsters being addicted to substance abuse. Modi also mentioned how the narcotics trade is a big threat to the safety and security of a nation.

500 MBBS students from Andhra Medical College also hopped on the drug free India campaign by pledging to neither take drugs nor let anyone else take them. The aim of this campaign is to spread awareness among the youth, and to warn them about the dangers of drug abuse, as well as to help those already addicted to rehabilitate.