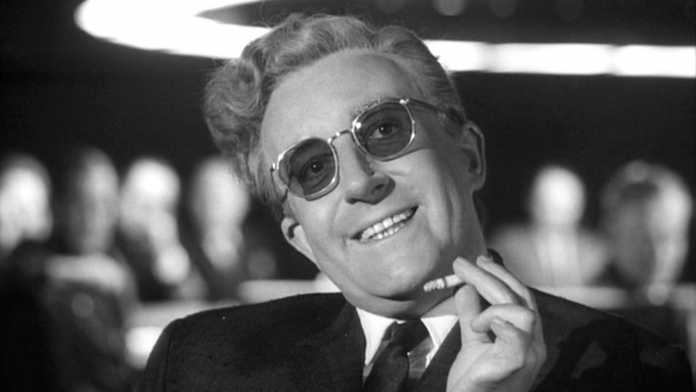 In today’s world, humankind has power like never before. Technological and scientific advancements have elevated human beings to the position of gods, providing them with the ability to destroy the entire planet by simply pushing a button. But what happens when these deadly weapons are placed in the hands of petty, vengeful fanatics who are no better than children?

That is the central theme of the movie ‘Dr Strangelove’. A parody of the Cold War, ‘Dr Strangelove’ portrays the famous rivalry between America and the Soviet Union as something utterly pointless, and at times even comical.

The movie starts off by introducing Jack Ripper, a general in the U.S. airforce who feels strong hatred and suspicion towards the Communists. Feeling that the U.S. government wasn’t taking a tough enough stance towards the Russians, he decides to take matters in his own hands. Things spiral out of control after he orders the bombers under his command to attack Russia.

The events that follow show how a small incident such as what Jack Ripper did can have immense, unintended consequences. As news of this incident reaches the ‘War Room’, the President of the United States panics since he is unable to figure out a way to recall the airplanes that are now heading towards Russia. Further alarm is caused by the news that any attack on Russia will automatically trigger the ‘doomsday machine’, a machine that would destroy all life on earth.

By demonstrating the huge consequences of such a trivial event, the movie implies that there was actually no substantial reason behind all the animosity between the two superpowers. ‘Dr Strangelove’ makes fun of the Cold War by depicting it as an event that wreaked a lot of unnecessary damage, while being completely absurd and meaningless. This applies not only to the Cold War, but also to the all the other battles waged between nations in the last century. In the end, they were all really just petty squabbles that, masked and glorified by values such as patriotism, were taken much more seriously than they should have been.

In more modern times, giving these squabbles more importance than they deserve could have dangerous consequences. Empowered by scientific advances, leaders of nations could now annihilate entire civilizations at will, and ‘Dr Strangelove’ shows that the leaders of the past were indeed at the brink of doing so for all sorts of trifling reasons.

We may think that our current leaders are more responsible than the ones of the past, but that’s not really so. The kind of god-like power that humankind now has should not exist with anyone, because the risk of it falling into the wrong hands is too great. If Kim Jong Unlost his temper on one fine day and decided to push that button, we are all as good as dead.

Likewise, the movie ‘Dr Strangelove’ ends with a scene that shows mushroom clouds erupting everywhere, portending the end of the world. The chain of events that followed Jack Ripper’s actions demonstrate the extent of the damage that can be wreaked by one deranged zealot wielding toys too powerful for him to handle. And when we really think about it, aren’t some of our current world leaders very much the same?