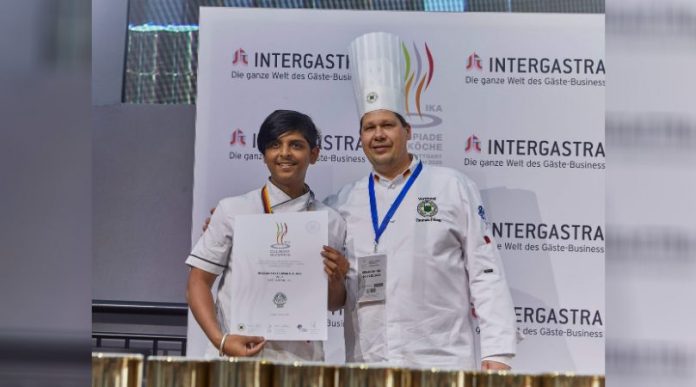 We all devour food when it’s presented to us with decorations that make it look even more delicious than it already is. All kinds of food, even the simplest dal chawal looks mouthwatering when presented well. This is the kind of touch culinary adds to food, but we hardly acknowledge the efforts chefs or culinary artists put into making food look so wonderfully tempting.
While we binge-watch every single episode of Masterchef with great attention, how many of us really know about the achievements bagged by some of our very talented Indian chefs? One such amazing talent and that too young, is a 16-year-old chef, Yeshwanth Kumar Umasankar who has been awarded four Silver medals at the Culinary Olympics 2020, Germany, that was conducted in the month of February.

For all those who don’t know, Culinary Olympics is the oldest, largest, and most diverse international culinary arts competition in the world. Representing India and also winning medals at such a prestigious competition is a great deal of pride for the entire country.

16-year-old Yeshwanth kickstarted with his culinary journey when he just as young as 9 years old. He says, “I developed this interest by looking at my father who is a Chef. He specializes in food sculptures such as fruit carving, vegetable carving, ice carving, chocolate showpieces, sugar showpieces, etc. I observe my father very closely whenever he teaches his students. His wonderful art never fails to amaze me. This helped me to not only develop my knowledge & skills but also the interest in culinary arts. This was very evident in all my actions.”

Talking about the achievements Yeshwanth has won till now, he says, “It all started with my first cookery contest, organized by a leading daily newspaper. I couldn’t get through the contest but gained a lot of confidence to compete in the forthcoming contests. The next one was the state-level contest organized by a popular Tamil satellite TV channel and I stood in the top 10. I was the youngest, as this competition was open to all. Mr. Ishari Ganesan, Vice-Chancellor, Vels University, after witnessing my skills in making Parota, was astonished and honored me with a scholarship that would entitle me to study in the university at zero cost.

He further goes on to say, “The next one was ‘Super Chef Chennai’ – the toughest competition in the city. I won for three years in a row. In addition to this list, I have 5 Gold, 1 Silver and 1 Bronze medal under my name from the professional culinary competitions organized by various Culinary Associations of India. The highest of all, is the Culinary Olympics 2020, Germany, where I recently won 4 Silver medals.”

After Yeshwanth returned home with four medals at the Olympics, he had left everyone speechless. He said that the whole of the Indian chefs’ fraternity was proud of this achievement and they celebrated it. Yeshwanth received an overwhelming response and appreciation from the chefs’ community.

This achievement was a historic win for India. Yeshwanth was competing with professional chefs who were twice his age, which made the victory even more special.

Describing his overall Olympics experience, Yeshwanth says, “Culinary Olympics is the world’s largest and toughest Culinary Competition and Exhibition, held once in 4 years. 2000 contestants from 60 countries gathered with more than 1 lakh visitors. It was a spectacular show that every chef would be willing to witness. I was absolutely delighted to be there. It gave me a great opportunity to showcase my skills, which in turn got me a lot of friends from various countries. We exchanged our ideas and learnt many things.

To move closer to his dreams with perfect dedication, and at the same time also focus on education, Yeshwanth chose to drop out of school and continued his education from the National Institute of Open Schooling, the largest open schooling in the world, coming under the Ministry of Education, Government of India. This was because his dates of 10th class board examination and Culinary Olympics were overlapping. He says, “ I feel extremely thankful to the Government of India for offering such a great facility to study. I completed my 1oth board examinations in October 2019 and peacefully focused on Culinary Olympics which held in February 2020. By the way, my results are out, I scored 401 out of 500.”

Yeshwanth himself loves to eat. He loves to cook his grandmother’s dishes, the videos of which he uploads on his YouTube channel ChefYKU, and eat chicken cooked by her. This 16-year-old’s goal is to master culinary artistry. he says, “I would like to become a celebrity chef with multiple skill set. Further, I would like to establish a World-class Culinary Art Studio to train future Celebrity Chefs, Corporate Chefs and Executive Chefs.”

When asked who his role model is, Yeshwanth said his father, Chef Umasankar Dhanapal has always been his biggest role model and inspiration. He further added, “I am also inspired by the great man, Chef Dimuthu Kumarasinghe from Srilanka, for his all-rounder culinary skills that have stolen many hearts from across the world.”

As a parting note, Yeshwanth Kumar Umasankar states that practice has help him great heights and so one must keep practicing, as it will do wonders for all. He says, “ if practice works for me it must work for everyone.”

Here is what, prominent personalities had to say about Yeshwanth