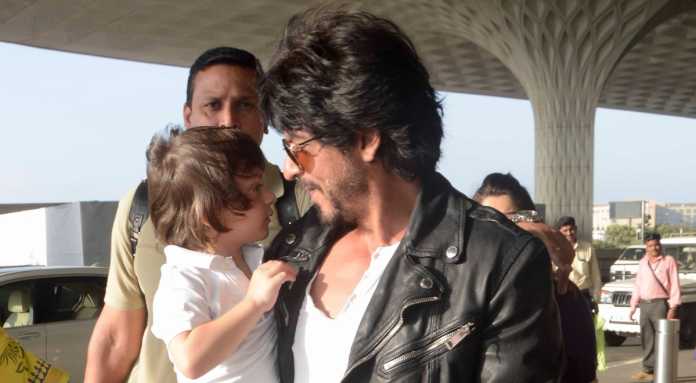 He bowls to your batting innocence; he listens patiently to all your nonsense, dependable in your hour of need. He is a father. He is the best person for almost every child who can give you first hand on reality and practicality check. Call him a ‘dad’ or ‘papa’ a ‘father’ the most important thing is to notice how this shade can be the best for the child in the journey of life.

They could have easily hired maids and servants to help them with the child. There would have been people queued outside their mansions to be the caretakers, but these celebrities chose to give the actual parental touch to the child’s upbringing. The bond getting stronger, establishes a greater level of understanding amongst the family.

Let’s take a look at 12 best celebrity fathers and the reason that makes them the best. David Beckham recently retired from playing professional soccer and now acts as the morning chauffeur for his four children with wife, Victoria Beckham. Between picking out the day’s outfit for his daughter, and breaking up fights between his sons over what type of breakfast to have, this celebrity dad has got his hands full. He insisting his children to go out and look for others in need of charity makes him a proud house-husband who even lets Harper style him. Riteish and Genelia certainly make up for being an ideal couple. But the way Riteish appears with his son Riaan seems even cuter. Carrying him in public and specially designing child-friendly furniture at home all qualifies his loving and caring nature towards his child. The couple was recently gifted with another son, seems interesting for Ritesh has a wider scope to express his love and parenting. Women fall for him being a drop-dead-gorgeous looking man and hate him for being married. But a picture with son Ayaan is enough to melt your heart for this dad. He recently was blessed with a daughter too. The boy though in every picture seems determined to grow up to be his dad’s defined handsomeness. A possessive father of his two daughters. Dad’s tattooed love Mahikaa and Myra names on his forearms. Managing the shooting schedules and at the same time allotting time to the family seems a tedious task. But Arjun seemingly does it better to be the best possible dad. We have very rarely seen his softer side as a father, only the crazy stuff that he does on screen. Akshay somewhere or the other intends to keep Aarav and Nitara away from the limelight, the time he captures in a family moment it is worth some respect. Usually, the child has to beg to the parents to get inked, but this cool dad has himself tattooed his son’s name on his back. After pampering Aryan and Suhana, now it’s AbRam’s turn to bask in all the glory. Shah Rukh makes it a point to ensure AbRam gets pampered and gets the needed attention while they travel together. This father-son duo have been grabbing all the limelight. Though Hrithik and Suzanne have been staying separately for some time this handsome hunk is always in media gossip with his two sons Hrehaan and Hridhaan. Holidaying, be it any random trips or adventurous ones is the dad’s vacation best surprise for them. Aamir’s children are alike his buddies with a picture perfect together. These are the desired family goals that Aamir and Kiran Rao are setting. The youngest one Azad as always is the most pampered as the entire family is busy tumbling after him. This little one looks adorable when he wears his glasses like his parents making it a cute family. “Well, I just preach to my kids that every day is Father’s Day, so I expect breakfast in bed every day.” A dad to two children, Huge Jackman is the most humorously serious man. The actor’s self-made rule being, his children should opt for volunteer work sooner they turn 13. Jackman and his wife have mutually decided on a two-week separation rule, which would force a race home if either of them is apart from each other for more than two weeks. For Will Smith parenting has been experimental, “So for me, it’s a deep uncertainty that I carry around, with my kids. I just try to teach them everything that I know and love them as hard as I can love them. And hope for the best.” When he was a father for the first time, he described the picture taken at that moment, as the one that depicted his face full of confusion. I could call him the best dad cause he is always there not as the traditional dad, but as a modern open-minded and willing to emotionally support the child. Being a very good cricketer at an early age, he is also known as Captain Cool. MS Dhoni has captained India in two World Cups. Under his captaincy, India won the World Cup in 2011 and reached the semifinals in 2015. Dhoni became father on 6 February 2015 to a cute little baby girl named Ziva Dhoni. Cristiano Ronaldo Jr. is all over his official social media handle. The most lovely relationship is seen on the field and at home where they are often seen playing. The 4 year old has no declared plans to join football, but the offset of the era will decide the inclination of this legend’s child. Messi started his football career at a very early age. He has two kids, Thiago was born on November 2, 2012 and Mateo was born on September 11, 2015, in Barcelona. When Antonella and Messi were expecting their first baby, Messi placed the ball under his t-shirt during their match against Ecuador. Lionel Messi has many tattoos on his body and Thiago’s name and hand-prints are inked on his left calf.

We hope that every father becomes the best dad who believes in loving their child and enjoying those golden and short lasting moments and keep them in their memories forever.