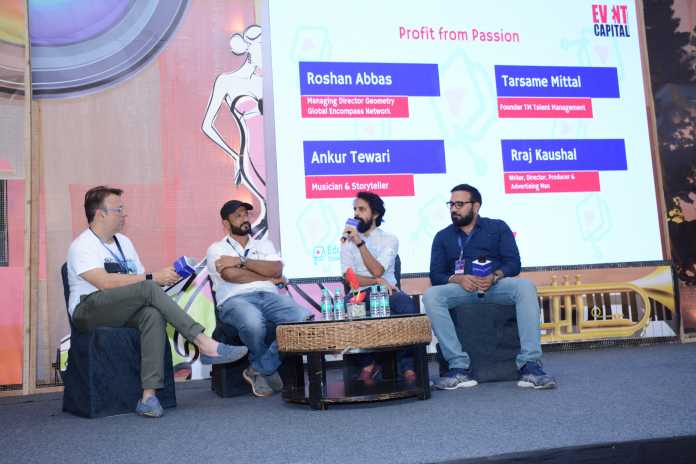 Mumbai, 19th May 2017: First day of the 5th Edition of India’s largest educational exhibition and summit, the Edutainment Show’ 2017 ended on a high note on 19th May 2017 at Hotel Sahara Star, Mumbai. Around 5000 media and design aspirants attended it. The Edutainment Show is organized by Event Capital (a Laqshya Media Group Company).

The aspirants witnessed some of the industry bigwigs sharing their experiences during the summit. Some of the prominent speakers were renowned film director, Ramesh Sippy who spoke on Careers in Media and Film; Fashion Designer, Nishka Lulla shared some tips on Entrepreneurship in Fashion. Casting director, Mukhesh Chhabra spoke on The Craft of Casting; some interesting tips were given on the craft of photography by famous photographer Jitu Salvani. AD king Prahlad Kakar spoke on the Power to take risk. Yash Bhanage, (Co-owner of Bombay Canteen) threw some light on Importance of Mentorship. Swaroop Banerjee, CEO of Event Capital, (a Laqshya Media Group Company) shared the story behind the success of Delhi Edition of Bollywood Music Project 2017 .There were many other industry experts who spoke on topics as varied as Design, Communication, Entrepreneurship, PR etc.

Day 1 also had various workshops which were conducted during the day on topics like Festival Design, Teamwork, Print and Making, Photography, Film class etc.

Speaking on the success of the first day, Mr. Deepak Choudhary, Co-Founder & Director, Event Capital, said “It was great to see over 5000 media and design aspirants attend, what is now, India’s largest creative education conclave. With over 50 speakers and 20 workshops, on the first day, the show has scaled new heights. We are looking forward to seeing a larger crowd tomorrow!”

Day 2 started off on a great note, the crowd at the event witnessed numerous industry bigwigs sharing their experiences in their respective fields. Day II began on a great note with RJ Malishka opening the summit followed by talks on various path breaking topics like sports and media, image management, designing a TV channel, how to talk creativity with your parents and many more. Theatre and Film actor Richa Chadda threw some light on the art of creating films while Roshan Abbas along with Rraj Kaushal (writer, director and Ad Man), Tarasame Mittal (founder of TM Talent Management) and Ankur Tiwari (Musician and Storyteller) drew in a big audience, discussing the many perks and tips on making profit out of your passion. Two of the youngest speakers of the summit Anamika Changrani Rastogi (11 year old) and Azadeh Changrani Rastogi (9 year old) introduced the audience to the concept of kids creating art for a cause. Dharavi Rockers wrapped up the summit with their rocking performance using the instruments made of junk.

In a first-of-its-kind initiative, aimed at bringing together the media, communication and design education sectors, the fourth edition of The Edutainment Awards was held on 19 May, 2017 to recognize and felicitate efforts made by educational institutes to impart quality education under multiple disciplines. Conducted in two stages, the Education Awards was the culmination of a comprehensive assessment and performance review of various key stake holders by a jury comprised of eminent personalities known for their contribution to education. Some of the Winners of the Edutainment awards were Xavier Institute of Communication, Mumbai for the Best Journalism School; Pearl Academy, Delhi-NCR for the Best Design School; ISDI WPP School of Communication, Mumbai for the best emerging media school; Pearl Academy was also declared as the best emerging design school; MICA Ahmedabad was declared as best post graduate mass communication school. This year, BW Business World and exchange4media Group powered the awards.

Speaking on the success of the summit, Mr. Deepak Choudhary,  Co-Founder & Director, Event Capital, said” The fifth year of Edutainment Show has created new benchmarks for us as event property owners, and with over 8,500 media and design aspirants attending the show over two days for enriching panel discussions and interactive workshops. We had over 100+ speakers sharing their professional experiences in the creative industry, and over 45 institutes showcased their courses to the students intending to chart their career in this space. We hope to take this forward and make it better with every edition.”