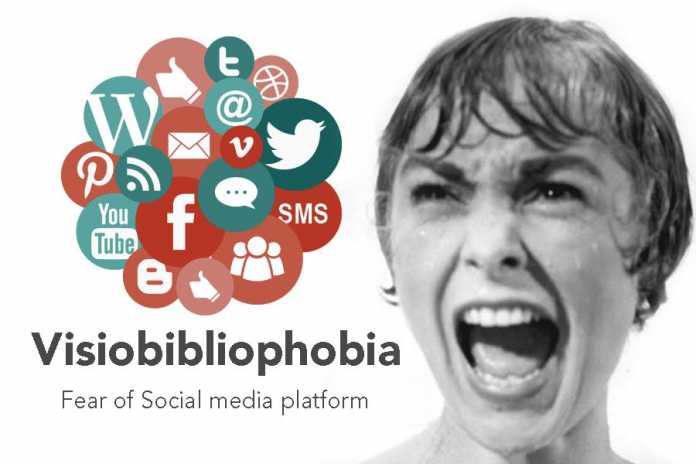 It’s the fear of social media. This phobia started off with the social networking site Facebook, but now involves all forms of social media such as Twitter and Instagram. People who suffer from this phobia check their Facebook wall a million times to see what their friends have updated or if they have missed out on anything. And when that isn’t possible it causes them stress. FOMO, which means “fear of missing out” is a common fear where you fear being the social outcast. A less common name for the disease is prosopobibliophobia which is rarely used

Do you have a mild heart attack every time your phone network goes low and you can’t reply to that text or scroll through your Instagram feed? Do you get anxious every time your phone has low battery life? Are you the kind of person who decides to go on an exotic vacation, only to change their mind because there isn’t good network in that area? Then you may have Nomophobia. It is basically the fear of being having no mobile phone coverage, having low battery life and not being able to use your phone for a long period of time.

It is the irrational fear of beards. People who have this kind of phobia cannot trust men with beards. It may be because of past traumatic events or parental influence. Bearded men are often perceived as men who are homeless or unhygienic and do not have the means to get a clean shave, which is probably a reason some might be really scared of them. After the 9/11 attacks, the fear of bearded men grew with a stereotypical attitude that they might be a terrorist. A clean-shave guy always gains more trust with people who have this kind of fear.

If you dislike Shakespeare’s Sonnets or Oscar Wilde’s poetry makes you anxious, than you may have the fear of poetry. ‘Metrophobia’ is the fear of poetry and is generally developed at an early age. This type of fear is common especially for children. They feel that poetry is something which is some way beyond their reality and that they only belong to the elite and people that are highly educated. People that fear poems may have anxiety attacks after reading a status that has a poem in it or will not want to read it aloud. Some may have anxiety while reading a greeting card. It might also depend on the message in the poems.

It’s the fear of music. This fear again is based on the emotions and message that the lyrics portrays that generates fear and anxiety in the minds of an individual. They may only listen to few songs or completely block out music from their lives. This can be hard to deal with. They could overcome their fear with positive music because music is a land full of hope and peace. The important thing is to listen to things that make you feel happy instead of getting worked up by the lyrics of the songs.

It is the fear of being single or staying alone. The thought of you staying all alone in an apartment makes you want to die. You get frustrated of being alone and can’t stay by yourself. You fill this empty void by spending time with partners you barely like or so called friends that you use to gossip about. When you are surrounded by people it makes your world complete you feel satisfied. People who are in a relationship may look at these people and say they are lucky but they don’t think so. This fear generally occurs because of past traumatic events and social phobias.

Athlimataphobia is the fear of sports. People who have these types of fears are because of some traumatic events in the past or injuries that have taken place during playing sports which have generated the fear of sports altogether.

The name itself may cause a phobia! This phobia is the fear of Friday the 13th or number 13th itself. Friday the 13th created fear in our minds ever since we have watched the movie ‘Friday the 13th’ and ‘I know what you did last summer’. People who have this fear do not go out of the house because they feel that they will have some kind of bad luck and their day will go also go bad.

In today’s day and age, where everyone wants a lean and slim body and are health conscious, many may avoid certain foods or may sometimes even avoid food all together. People who suffer from these kinds of phobias avoid dairy products. They may fear foods that have crossed their expiration date. Food that is cooked out of their control in hotels will develop stress and anxiety in the minds of these people. They may feel bad to decline food at a function or when they are at a family gathering because it is rude not to accept food. The symptoms include weakness, dizziness and feeling irritable. To avoid the doubts they have about how the food was cooked they may not eat all together.