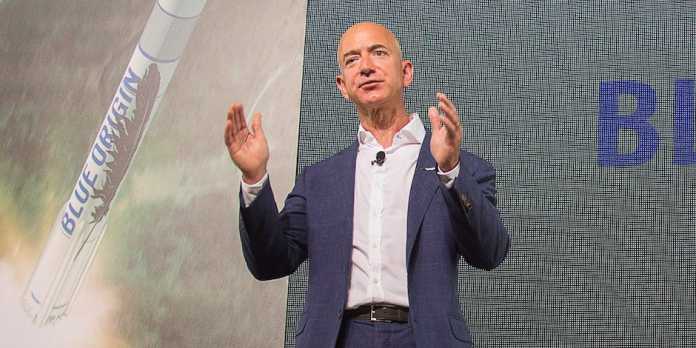 Billionaire Jeff Bezos has revealed that his company Blue Origin will soon start selling tickets to space, to tourists next year. This announcement comes in the midst of plans by Elon Musk and Richard Branson to send people into space.

At the Amazon Web Services Public Sector Summit, Blue Origin Senior Vice President Rob Meyerson revealed that they plan to send their first test passengers into space soon. They also plan to start the sale of tickets by 2019. However, the price of these tickets are yet to be revealed, as Bezos said that they haven’t decided upon a price yet. The firm, which plans to run tourist flights, has even produced an animated video showing people on a suborbital flight in New Shepard vehicle. Blue Origin has flown the New Shepard nearly eight times and is also reportedly working on a Blue Moon lunar lander. Officials say that the next flight is scheduled to be somewhere in the ‘summer timeframe’. Branson’s Virgin Galactic had already started selling tickets a decade ago, even when their vehicle SpaceShipTwo was still in its early stages of development. Around 700 customers, including celebrities Brad Pitt and Katy Perry, have paid a deposit. The test flight last month reached halfway to the edge of space. The vehicle is expected to carry six passengers and two pilots. Elon Musk is also expected to reveal a launch schedule for a manned version of the Dragon Capsule that will ferry astronauts to the International Space Station under a contract with NASA. This will be followed by a flight sending tourists to the moon.

Last year Bezos revealed that he $1 billion of Amazon’s stock to finance Blue Origin, every year. He is also trying to launch ‘New Glenn’ rocket into low-orbit earth by 2020. If all goes well with the tests programs on New Shepard, humans could be looking at going to space in a year’s time.

However, Elon Musk’s SpaceX has already beat Bezos to space, as the Falcon Heavy rocket was launched towards the orbit of Mars on February 6th, earlier this year.