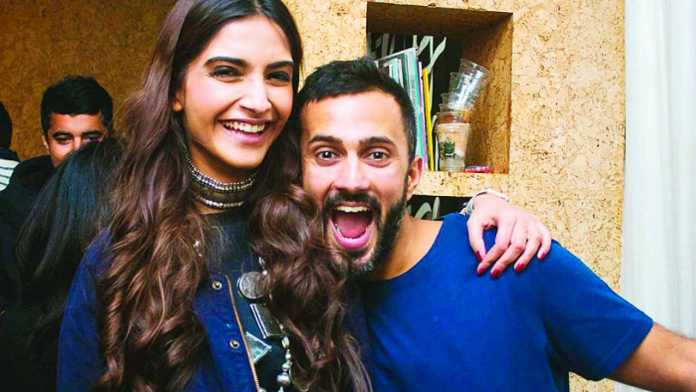 For months, there has been wild speculation about Sonam Kapoor’s fiancé, Anand Ahuja. Their engagement was confirmed early 2018, and marriage with a sincere request to respect the family’s privacy on this merry affair. Anand Ahuja and Sonam Kapoor share a common love for fashion, which happens to be what spiked their interest in each other in the first place. They share the same determinism and grit to achieve something doing what they love. Their story makes us truly believe in the concept finding a partner who builds your personality, and understands and supports your decisions.

The question remains – who is Anand Ahuja? Beyond just being Sonam Kapoor’s husband, he can aptly be depicted as a beacon of hope for those who wish to follow their dreams and choose to pursue a career doing what they love. Born into a family of business titans, it is no surprise then that he, too, set foot on the path of entrepreneurship and today, is the owner of Bhane., a clothing brand that is both, inexpensive and has global consumer appeal. His vision for the brand came before fashion giants like Pink and Burberry set up stores in India and were entirely inaccessible to the general population, both physically and financially. He wanted for the people of India to be able to wear what they wished, at affordable prices.

Later, Ahuja also co-founded the first sneaker store in India, Veg Non Veg, which came as no surprise, given his evident love for sneakers as seen on his Instagram. Ahuja says that both, Bhane. and Veg Non Veg have miles to go. He knows that his journey into the world of business has just begun, and he has someone to walk with through the long, winding way.

He admitted to never planning to be an entrepreneur growing up, but with his love for fashion and especially sneakers, he had a gut feeling that this was the dream he was meant to follow. In today’s world of ever-growing choices of careers to choose from, his story is a ray of hope to push us in the direction of pursuing our passion.

Besides sneakers, shirts (and Sonam Kapoor, obviously), Anand Ahuja’s interests include an undying love for Basketball, (especially the Los Angeles Lakers), Nike’s, and the all-time favourite, the Brazilian Acai bowl, and travel – evident from the plethora of his pictures abroad with wife-to-be Sonam Kapoor.