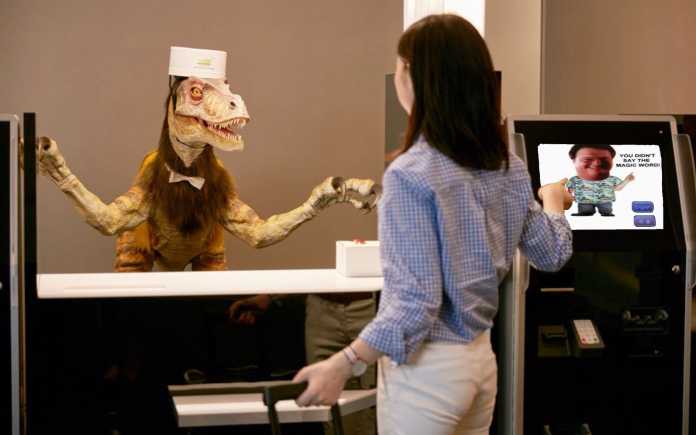 Just when you thought technology has seen it all, Japan certainly knows how to throw a curveball. In the ongoing debate about whether the technology will take over our very functioning, walking into Japan’s Henn na Hotel might just as easily settle that debate.

Don’t expect your typical hotel check-in experience here, instead you’ll walk into a little Jurassic Park world of its own. The hotel has robot dinosaurs manning the desk who are more than happy to assist customers in English, Japanese, Chinese or Korean. When you enter the hotel you can easily be tricked into believing that the dinosaurs are mere showpieces. But as you approach their desks, the sensors detect motion and you are greeted with a ‘welcome’, as the dinosaurs stretch their arms out in gesture.

What is incredibly striking about the robot dinosaurs are the tiny bellboy hats on their heads. The Henn La Hotel prides itself on being the world’s first hotel staffed by robots, and after opening the first one in Nagasaki, the hotel was also certified by the Guinness Book of World Records.

Each room is staffed with mini-robots that look a bit like spherical Star Wars droid BB-8, and help guests with everything from changing channels to playing music. However, hotel manager Yuko Nagai says that some customers find it a bit unnerving. “We haven’t quite figured out when exactly the guests want to be served by people, and when it’s okay to be served by robots,” he said.

The travel agency group operating the chain runs eight hotels across the country with only robots for staff – some dinosaurs and some humanoids. In case of technical glitches, human staff are called to intervene, but it is not a frequent occurrence.

Nagai admittedly says that ‘hiring’ robots for desk duties or even cleaning services has proven to be a rather efficient choice. “It’s becoming difficult to secure enough labour at hotels. To solve that problem, we have robots serving guests”, he said.