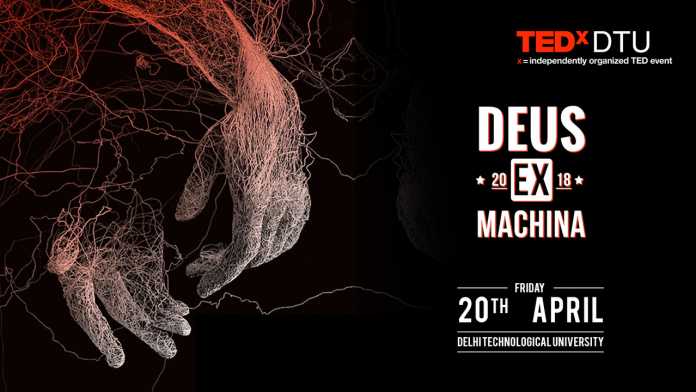 TEDxDTU, one of the capital’s most awaited TED events, is back with an intriguing array of speakers on April 20th, 2018 at Delhi Technological University from 11.00 am – 7.00 pm. TEDx events are locally organized conferences licensed under TED, a non-profit organization devoted to ideas worth spreading.

The talks in the event will be centered about the theme ‘DEUX EX MACHINA’. It aims to coalesce with the very principle of TEDx– Ideas Worth Spreading. With issues arising in every field, the goal is to bring forth a series of revolutionary ideas which break the generic glass ceilings, and bring forth interesting outcomes. It aims to foster the generation of solutions which have been staring us in the face all along, and invoke conversations of its implications in the modern scenario.

The event will display a spectacular set of talks and performances, wherein a reputed panel of speakers will encourage the audience to express themselves articulately, by discussing innovative ideas and sharing impactful messages.

“This time we’re innovating at the highest levels to produce an event of global standards which will resonate amongst us all. We will see the reflection of our similarity in our uniqueness,” said Nilasis Bhattacharya, Curator of TEDxDTU 2018.

Speakers for TEDxDTU 2018 include distinguished representatives from their respective fields, such as: KARAN WAHI –TV actor, host and model. He started his television career in the 2004 show Remix, through which he garnered fame. He made his Bollywood movie debut in Habib Faisal’s Daawat-e-Ishq, and had a lead role in Hate Story 4.

ANKUR WARIKOO – He is the Co-Founder and CEO of com– which is his third startup. Passionate about organization building – Warikoo cares enough to share his experiences as an entrepreneur on social media – making him a powerful influencer.

AKASA SINGH – With a blockbuster hit, ”Tu Kheech Meri Photo”, she is one of the most talented live singers in this country. She began performing at an early age of 17yrs and has been a favourite amongst TV shows, featuring in Angels of Rock (MTV) , India’s Raw Star (Star Plus) and the most recent being Amazon Originals- The Remix.

KAUSTUBH RADKAR – He is a former national swimming champion and has finished the coveted IRONMAN triathlon on all six continents, being the first Indian to do so, in October 2015. He has finished 20 Ironmans till date most for anyone living in India.

VIKI VAURORA – Founder of great legalization movement. He proved that cannabis can be regulated to cure cancer, and the PMO has now demanded a relook into cannabis prohibition all because of his efforts.

ANINDA BAGCHI– He is the Associate Director of Project Management at CBRE, one of the largest commercial real estate services and investment firm in the world.

RJ SUKRITI – She is an electronic engineer turned RJ turned Video blogger turned Video Host/VJ. She has previously worked with radio channels such as Radio Mirchi 98.3 FM Delhi and is currently hosting a show with a hugely popular online gaming/quiz app, Brain Baazi.

ISHAN BOSE – He is a man with many hats, currently being the head of Marketing, Sales and PR at KrazyBee as well as the head of India Operations at DingTalk (DingDing), the Mobility ERP solution from the Alibaba Group, focusing on the higher education institutions.

SHUBHA VILAS – After 11 years of monkshood, he set out to spread joy and knowledge of living a life based on the purity of scriptures, making them not just understandable but also practical. He has also authored many books, including a six-volume rendition of the

SANDRA COLHANDO She is the Co-Founder of TransforME Learning and Leadership Solutions, an award-winning results-based learning firm focused on enabling personal transformation. Prior to this, she has also held senior positions in organisations such as GE, Convergys, Indiabulls and Mahindra & Mahindra.

Catering to the enthusiasm preceding the event, TEDxDTU invites registrations on its website www.tedxdtu.in/accounts/login.