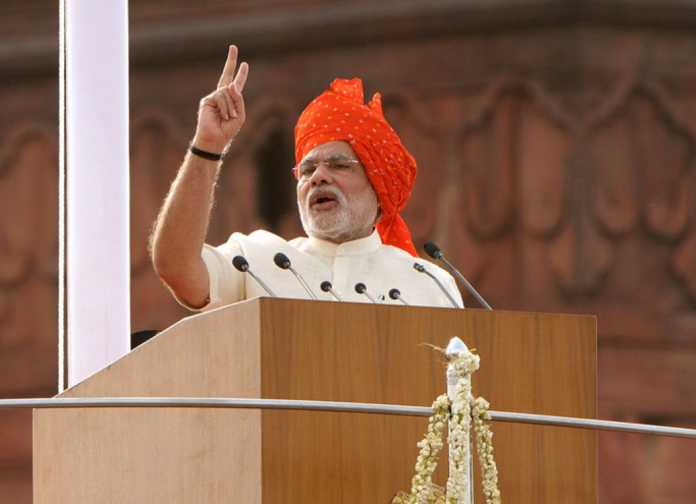 India celebrated its 71st Independence Day in all its glory on 15 August 2017. As the nation was festooning with our tricolor everywhere, PM Narendra Modi gave an address from the Red Fort. The focus of his fourth Independence Day speech ranged from issues such as demonetization, terrorism to cleanliness and the education of girls.

PM Modi, known for his gripping words, gave another compelling speech. In case you missed it, here are highlights from his speech-

PM Narendra Modi kicked off his speech by talking about the commemoration of important events in 2017 such as the completion of 75 years of Quit India Movement in August 2017, commemorating the centenary of Champaran Satyagraha and the Sabarmati Ashram. He said that this year also marks the centenary of Lokmanya Tilak’s call ‘Swaraj is my birth right’ and the 125th Anniversary of Ganesh Utsav which led to the rise of community awakening through the celebrations.

During his speech, Modi focused on building a New India by 2022. He said all Indians should work towards creating a secure, prosperous and strong nation, which would function on democracy. “We will build together an India, where there will be no place for nepotism and corruption. We will build together such an India, which will be clean, healthy and fulfil the dream of self-rule (Swaraj)”, he said.

He applauded the uniformed forces and hailed the surgical strike that took place in India. He reaffirmed that the security of the nation is his government’s priority. “Be it our coast line or our borders, space or the cyberspace, India is capable of ensuring its own security and strong enough to ward off any threats against the country”, Modi said.

PM Modi talked about making India corruption-free. He detailed about the Benami property saying, “The government has confiscated Benami properties worth over Rs.800 crores. When these things happen, the common man develops faith that the country is for the honest persons”.

He mentioned the results of efforts made against corruption saying, “Our strive for a Corruption Free India has yielded results. Black money worth Rs1.25 trillion has been unearthed. Over 1.75 lakh fake companies have been shut down”.

The newly implemented economic reform of the nation, GST, held an important part of his speech. He highlighted the impact of GST, which according to him,“has shown the spirit of cooperative federalism and has given competitive cooperative federalism a new strength”.He also gave references about how GST has affected different sectors such as Indian Transportation.

Informing the people about their nation’s progress is an important task. PM Modi listed out the major developments in the different sectors such as-

“The ‘One Rank – One Pension’ policy for our defense forces was stuck up for 30-40 years. Our government implemented it. When we fulfill the aspirations of our soldiers, then their morale goes high and their resolve to protect the nation grows manifold”.

“Bank accounts of 29 crore people have been opened, more than 9 crore farmers have got Soil Health Card”.

“Loans worth more than 8 crore have been sanctioned without guarantee to the youth for self-employment. The interest on bank loans have been lowered.”

He marked the provision of electricity to more than 14 thousand villages that shrouded in darkness even after Independence. He spoke about a portal called “GEM” and said that his government is making procurement through this portal.

Modi included the farmers in his speech and appreciated their efforts and detailed about the benefits of policies such as Pradhan Mantri Fasal Bima Yojna.

“Three years back, this scheme which was running under a different name earlier, covered only 3.25 crore farmers. Now over a short span of three years more farmers have been brought under its ambit. The number is soon going to touch the 5.75 crore mark”, he mentioned.

“On Kashmir, there is rhetoric and politics. But I am clear in my belief on how to win the war against separatism, which is spread by a handful of people. The problem will be solved neither by abuse or bullets – it will be solved by embracing all Kashmiris. Such is the legacy of 125 crore Indians”, he asserted.

He highlighted the reforms taken in favour of women of the country such as night time employment opportunities and paid maternity leaves and  It also included the Triple Talaq issue.

In the speech that was not too long,  PM Narendra Modi enlisted the actions of NDA government, spoke about the important issues concerning the nation, made a mention about the reforms in the framework such as GST. Amidst the roaring applause, PM Narendra Modi concluded his speech by saying the proud verses for every Indian- Bharat Mata Ki Jai, Vande Mataram, Jai Hind.