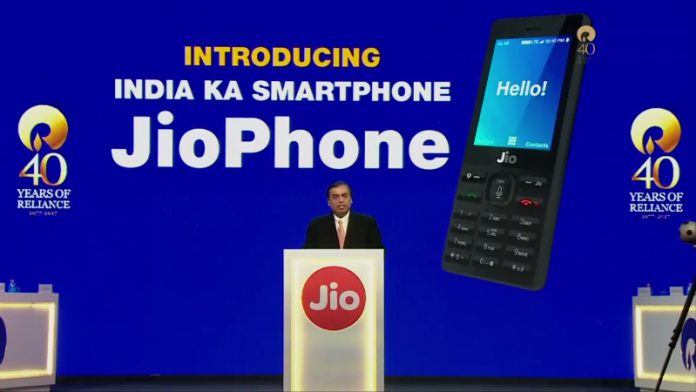 After the massive success of Jio sim cards, Mukesh Ambani the managing director of Reliance is once again ready to take the Indian markets by storm. Today at their annual AGM he announced the launch of its much talked about 4G phone, which is named as JioPhone – India Ka Smart Phone.

Like the Jio sim cards were free for a period of time, the JioPhone will also be available for free but buyers will have to deposit an amount of Rs 1500 which will be refundable after three years. This means the phone will be available effectively free.

“It is made in India by the young Indians,” Isha Ambani said this while announcing the launch of the JioPhone along with her brother Akash Ambani

Voice enabled activation of calling or messaging is a new feature which is the most attractive in this phone on the lines of Siri from Apple phones. Meanwhile, the company has also launched a device called Jio phone Cable TV at Rs 309 per month using which you can connect the JioPhone with any TV and not just a smart TV. Users can opt for Rs 309 that will allow them to watch video of their choice for 3-4 hours on large screen.

This is definitely a great move for the rural market as we all know they cannot afford the other smart phones which are priced at a higher rate.

So look forward to the reviews of the phone soon. Are you going to get one too?