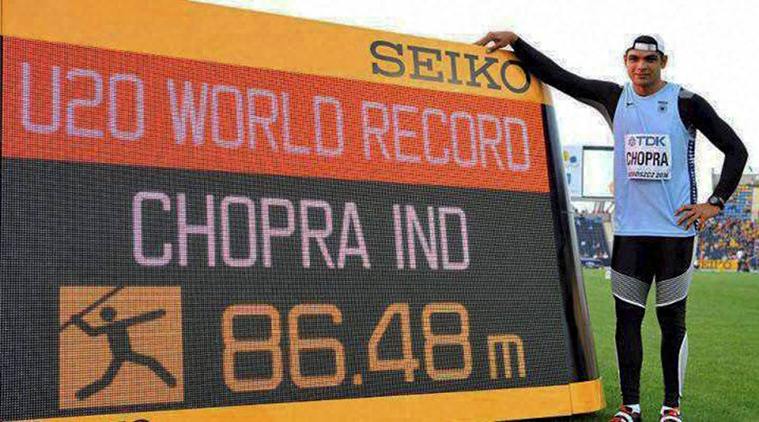 Javelin thrower Neeraj Chopra wrote his name in history books by becoming the first Indian athlete to become a world champion at any level after winning gold medal at the U-20 World Championships in Poland.

Chopra, who broke the earlier record of 84.69 meters held by Latvian Zigismunds Sirmais, recorded a throw of 86.48m. The 18-are-old was gunning for a spot at Rio Olympics but failed to hit the qualifying mark of 83 meters and now have stunned everyone with his record breaking throw.

Neeraj began the proceedings with an effort of 79.66m that put him second place after the first round behind Grobler who had touched 80.59m with his opening effort. The Indian came up with his massive throw on his second attempt that measured a new world record distance. The previous record of 84.69m was set by Latvia’s Zigismunds Sirmais in 2011.

The Indian, sponsored by JSW Sports, then came up with another impressive effort that measured 78.36m while his fourth and last attempt ended in a foul.

Meanwhile, his challenger Grobler’s form dipped as he managed only 69.01m on his second attempt. After fouling his third chance, the South African improved to 75.16m but his effort was nowhere near Neeraj’s record mark.

Hailing from Haryana’s Khandra village, Neeraj had served notice of his prowess on December 31, 2015 when he set a world leading distance of 81.04m to win the Inter-Varsity Championship gold in Patiala. After narrowly missing the Olympic qualification mark by 77 cm, Neeraj had now made am It was India’s first gold medal in the U-20 worlds following the two bronze medals won by discus throwers. Seema Antil was the first to climb the podium when she won the bronze in 2002. Two years back Navjeet Kaur Dhillon also finished third.