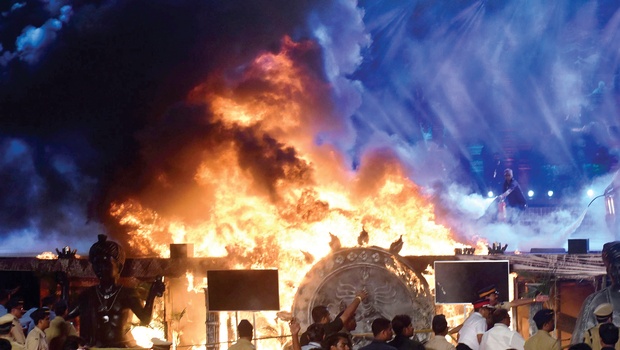 A special show called Make in India was organized on the 14th of Feb 2016 at Girgaon Chowpatty. Make in India is an economic event designed by our Prime Minister – Mr. Narendra Modi – to encourage foreign investment. However, during this cultural event a massive fire broke out under the stage, due to a short circuit, during a lavni performance at the event.

Several VIPS were present at the event. Maharashtra Chief Minister Devendra Fadnavis and Governor C Vidyasagar Rao who were present during the programme were quickly moved out of the area. However, Devendra Fadnavis stayed at the spot and personally monitored the operations. Prime Minister Narendra Modi spoke to CM Fadnavis and took stock of the situation. 14 Fire engines,10 Water Tankers, and all senior Fire Officers were on site. Amitabh Bachchan had left the stage a few minutes before the fire started. Actor Aamir Khan was all praise for the “orderly evacuation” at the spot. Several fire tenders were brought in to control the fire.

All dignitaries, including CM Chief Minister Devendra Fadnavis, Shiv Sena Chief Uddhav Thackeray, Governor Vidyasagar Rao, several film personalities and foreigners were evacuated. According to Wizcraft crew, no casualties were reported.  All backstage performers were immediately rushed outside in minutes after fire spread.

However, it seems that the Bombay HC had previously refused the permissions for this Maharashtra night event which was then passed on in the SC, which was then permitted. A bench of Justices M Y Eqbal and Arun Mishra had stayed the January 28 Bombay High Court order that had said that the court had a duty to protect the beach and had upheld a high level committee’s decision that the guidelines did not permit such functions. The committee was appointed by the HC in 2001 on a petition filed to save the beach front and the court accepted its guidelines in 2005. As per the guidelines, the beach is strictly not to be used for any public or political gathering or similar purposes, other than the occasions of Ram Leela, Krishna Leela and Ganesh Visarjan. The HC had said that permitting such a function on the beach will be in complete contravention of the binding guidelines applicable to all parties and consented to by the government.

We’re sure that no one had ever anticipated that a fire would occur and be a safety hazard.