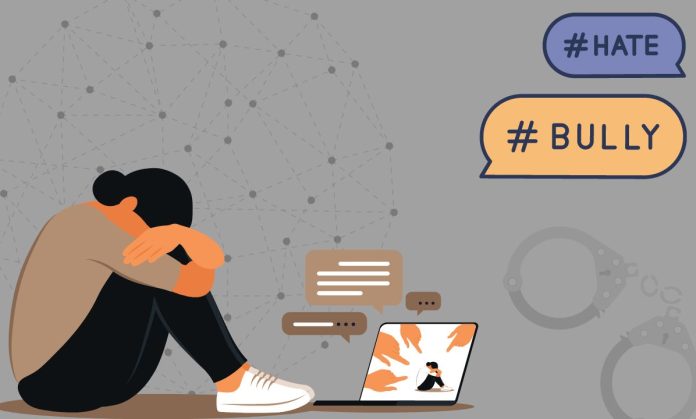 Cyberbullying is defined by UNICEF as bullying that occurs through the use of digital technologies. It can occur on social media platforms, messaging platforms, gaming platforms, and mobile phones. It is repeated behaviour intended to frighten, anger, or shame those who are targeted. It includes everything from posting hurtful words, derogatory comments, and false information on public forums or blogs to threats to rape or kill.

Increased internet usage in a digitally empowered society increases the risk of youth harm from cyberbullying on various social networking platforms. In a survey conducted by Child Rights and You (CRY), a non-governmental organization revealed that 22.4% of respondents, aged 13-18 years, who used the internet for longer than three hours a day were vulnerable to online bullying. Cyber-bullying victims may experience anxiety, depression, and other stress-related conditions. In order to tackle the menace of cyberbullying, there are certain legal provisions that can be relied upon to penalize cyber bullies.

The NCCR portal is a Government of India initiative that allows victims of criticism, particularly women and children, to file online complaints. They take immediate action on filed complaints with the assistance of local police.

The above link contains contact information of Grievance Officers in each state to track the status of a complaint filed online.

Cyberbullying legislation for schools and colleges in India

With the rise in bullying in schools, particularly in boarding schools in India, the Human Resource Development ministry has established anti-ragging committees to combat the problem. These committees work to punish students who engage in the activities and to rusticate students who are heavily involved in bullying. The University Grants Commission issues anti-ragging regulations in universities and colleges, with proper UGC regulations aimed at reducing the rate of ragging in higher education institutions.

These are some of the remedies available to victims of cyberbullying. It is clear through this article that India needs to amend its cyber security laws to explicitly include provisions governing cyberbullying.