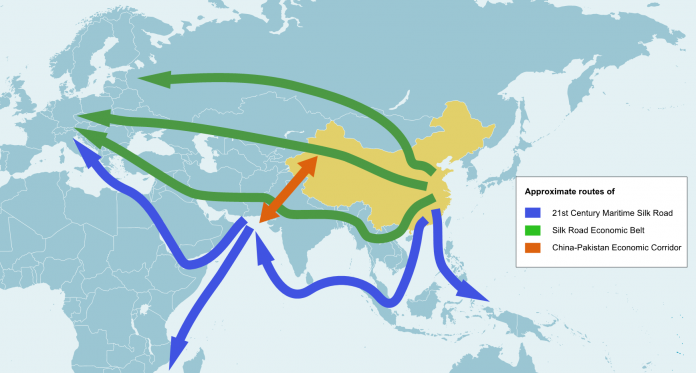 China has been planning an economic corridor which would connect China to the rest of Asia and beyond. It is going to be a reworking of the historic Silk Route which was very important for trade route for most of history since the Han Dynasty in China.

There is much controversy over the route going through Pakistan Occupied Kashmir (Pok), which India claims as its own territory that has been occupied by Pakistan. India opposes the construction of this road as it claims that China isn’t recognising its sovereignty and regional integrity. By making a road passing through Pok, China is accepting that it is part of Pakistan.

India’s foreign minister Sushma Swaraj was dissatisfied with this project when she attended a meeting held in Beijing by the China and Russia-led Shanghai Cooperation Organisation. Foreign Ministers of Kazakhstan, Kyrgyzstan, Pakistan, Russia, Tajikistan and Uzbekistan, have all praised the Belt and Road Initiative.

The committee generally agrees on a lot of matters including ones like Iran Nuclear Deal and the need to combat extremism in their respective countries. China will look to convince India but states that it does not want to push it. Modi has also been to China for the Shanghai Cooperation Organisation Summit 2018. However, China is yet to convince India on the matter.

India not accepting the project also comes after the notorious Doklam Standoff last year. This was also related to construction of roads in Bhutanese territory of Doklam. Chinese President Xi Jinping’s constant talks with Modi have also raised an alarm with Pakistan. However, China has ensured Pakistan that they’ll always remain as allies.

China also states that this road will not only benefit China but also promote peace in the region and bring the Asian countries together. However, India does not look to support this Belt and Road initiative any time soon.