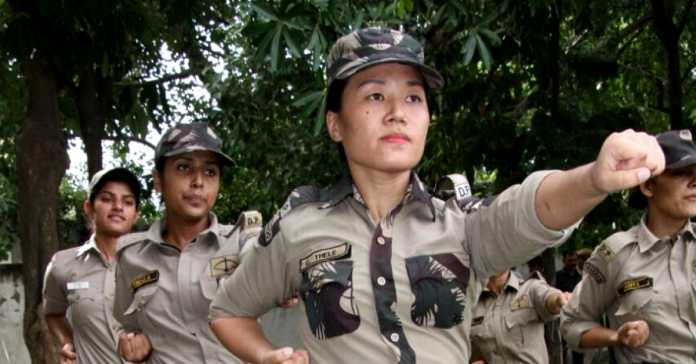 With just two days to go for our Independence Day celebrations, Delhi police inducted an all-woman Special Weapons and Tactics (SWAT) team, a first of its kind for India. The team comprises of 36 women from Northeast India.

The women underwent some rigorous training for around 15 months from specialists from all over India and abroad. 13 members of the team are from Assam, and the rest are from Arunachal Pradesh, Manipur, and Sikkim. “These women are second to none when it comes to handling terror strikes and hostage crises in urban areas. In fact, they were rated better than their male counterparts by their trainers at Police Training College in Jharoda Kalan,” said Delhi Police Commissioner Amulya Patnaik, who was the driving force behind the SWAT team.

The commandos’ extensive training was designed to teach them to handle operations in the urban as well as jungle areas, with a basic knowledge of explosives and Improvised Explosive Devices. They have also been trained in unarmed combat, ambush, counter-ambush, building and vehicle interventions, and VVIP security. “Experts at abseiling and scaling, they can spring from deep sleep to action, fully armed, within a minute of an alarm. Not only have they mixed well with personnel from other parts of the country, but there is also an amazing mix of cultures on display at the academy at present,” one of the SWAT team trainers was reported saying. The team will be strategically placed to provide security across parts of Delhi, and will also be deployed at the Red Fort, where Prime Minister Narendra Modi will deliver the Independence Day address, and at India Gate. The team is armed with MP5 submachine guns and Glock 21 pistols and is well-versed in Israeli Krav Maga.

“They are experts at handling weapons and they have the training to tackle any form of a terrorist incident or hostage-taking crisis anywhere and anytime. The women are competent and we have full confidence in their capabilities and that is the reason we have given them this important task,” said a Delhi Police officer.