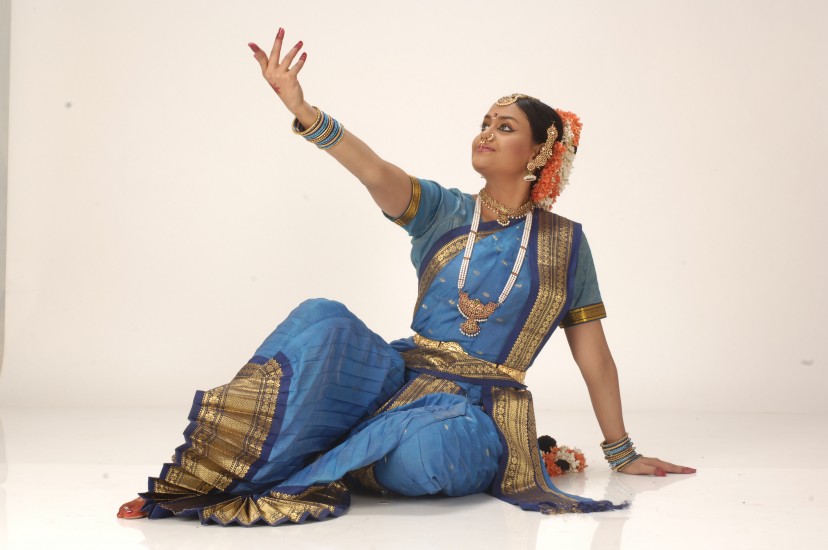 Mandeera Tracy Chaudhari has studied Bharat Natyam under her guru, Sandhya Tai for over 30 years. We talk to her about what this relationship means to her and how it changed her life

TELL US A LITTLE BIT ABOUT YOUR RELATIONSHIP WITH YOUR GURU, SANDHYA TAI.
Normally when you think of a guru you think of somebody who’s a lot older than her student; someone who keeps preaching and giving philosophical lessons. It wasn’t like that between Sandhya Tai and me. She’s only 10 years older than I am. When I started off studying dance, I started it just like a hobby class. But over a period of time, I saw that this was not like a regular class because she made it so. We used to go out a lot. My guru took me out for a lot of programmes. In fact, I saw my first Russian ballet, The Swan Lake with her; because she thought that I needed exposure to dance forms apart from Bharat Natyam. It was only because of her that I could go watch performances of dance legends like Protima Bedi and Sanjukta Panigrahi. Even beyond these performances, she has taken me to the aquarium and melas. At that time I thought of it as just entertainment; I just thought she loved me a lot and wanted to spend time with me. But it wasn’t until much later that I realised that her intention was to have me observe movement and expression. In Bharat Natyam, we have something called Mainavi Gati, which has to do with the movement of a fish; so when we would go to an aquarium she would subtly tell me to look at how the fish is moving. When we used to go for these horse rides, she would tell me to look at how the horse is standing, in its particular stance and posture. We call it the Ashvakranta, and there is actually a lot of resemblance between the posture of the dance and the posture of a horse.
I started studying under her when I was 10, and it’s been 30 years today that I’ve been studying under her. In today’s day and age, sharing a relationship with somebody for 30 years is a feat. You can’t even be sure to have a good, healthy relationship with your spouse for as many years now. I can say that we have stood the test of time and seen it all, the ups and the downs and everything in between.

WHAT WOULD YOU SAY WAS YOUR MOST MEMORABLE MOMENT WITH YOUR TEACHER?
I’ve been with her for so many years that it’s quite hard to pinpoint one single moment, but if I had to, it’d very obviously be my Arangetram. Being her first student, she had a lot of expectations from me and I wanted to fulfil those expectations. She was very happy with the Arangetram that I did, and I think that was the first memorable moment that I had with her. After that, the moment she chose me to present the Marathi Nirupan, which is like a margam of around 18 items and also the research work of my Dada Guru, Acharya Parvati Kumar; that was also a very memorable moment because I don’t think anyone in the class has presented this Nirupan after I did. These moments have been like wow moments in my life that I’ve had with her and they wouldn’t have been possible if not for her training and her guidance.

HOW WOULD YOU SAY YOUR RELATIONSHIP HAS EVOLVED OVER THE YEARS?
Through college, I was a very good student, very disciplined. I give myself credit for that. I believed in everything my guru told me. So if she said, “Mandeera, this is good for you”, I believed in it and I did it. For example, I majored in Sociology. She wanted me to major in Sanskrit, but at the time, no English medium college was teaching the subject, and I could not have done my graduation in the Marathi medium. So I majored Sociology. I was also pursuing Dance very seriously at the time. She had told me that if I wanted to pursue a career in Dance, I should learn it. I went on to do my Masters in Sociology and then followed it up with another Masters in Dance from my guru’s institute, Bharat College of Fine Arts, which has Nagpur University affiliation. Then one fine day she told me I should give my PET exam. This was long after I’d finished my education, I’d gotten married, and I had kids. I remember telling her that I was unsure about being able to pursue an education again after having been out of it for so long, and she just said, “If I’ve given you the best in the knowledge that I have, I’m sure you will do it.” The PET exam is a common entrance exam for a Ph.D. I gave it, and I passed, and I’m currently doing my Ph.D. under her from the Kavi Kulguru Kalidas University, Nagpur.

STUDENTS ARE GENERALLY INTIMIDATED BY THEIR TEACHERS. WHAT WAS IT ABOUT YOUR TEACHER THAT MADE YOU SO COMFORTABLE, ENOUGH TO STILL LEARN UNDER HER FOR SO MANY DECADES?
There’s this Hindi saying that says ‘Bhit bina nahi hoye priti’, which means, without fear, there is no love. I wouldn’t say that I’m scared or intimidated by her; I would actually term it as respect. Even today, if my guru walks into class, I will stand. Or if I’m sitting too casually, I will cross my legs. I don’t see this in children today. Times have changed, and today these children believe that outside the classroom, their guru is their friend. It is not like that with my guru and me. Though I can tell her everything and share absolutely anything with her, there is a line that I would never cross with her. It’s a maryada that is essential to the relationship between a teacher and her student.

WHAT DO YOU ADMIRE MOST ABOUT YOUR TEACHER?
I admire her dedication to the dance form and her thirst for knowledge. She doesn’t believe in rest time. She’ll just go crazy working, and teaching, and studying, and researching. Everything for her is a form of learning. I remember when we had gone for a study tour of the temples and sculptures in Tamil Nadu. We would do different taals, or we would learn the 108 karnas, just in the way that you would play a memory game in the train for fun. So by the end of the trip we had all learnt 108 karnas. Or she would ask us to sing a popular Bollywood song in Mishragati or Tishragati; something that gets her students thinking about everything in connection with dance. Another thing I admire about my guru is that she’s very patient. She has lots to give, but she is very down to earth. She always believes she have more to learn. And truth is, students can be very nasty at times. They can say terrible things about you, but she’ll just forgive them. She’ll say it’s okay, they made a mistake; it’s okay, let it go, let’s move on. My relationship with her is very beautiful and I believe I’m very fortunate to get a guru like her. She made sure to hone my talent and impart her knowledge onto me perfectly. And I will always be thankful to her for that.

Though I can tell her everything and share absolutely anything with her, there is a line that I would never cross with her. It’s a maryada that is essential to the relationship between a teacher and her student.