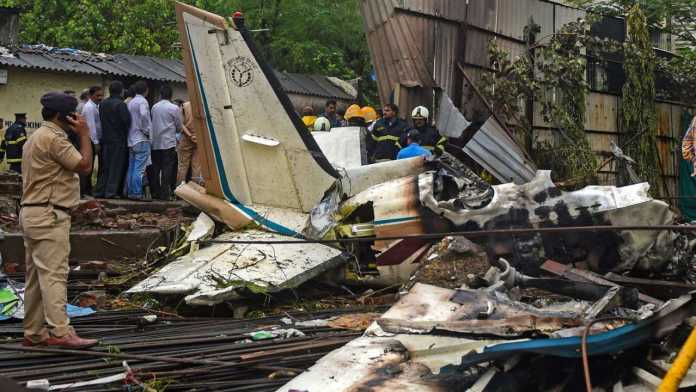 On the afternoon of 28th June, while the suburban area of Mumbai city was recovering from a rather rainy morning, another thunder took city by the shock when a twelve-seater plane VT-UPZ crashed in Mumbai’s suburban Ghatkopar carrying four people, who all died when the plane fell in an open construction site crushing a pedestrian, while three other people were injured.

The incident took place near Sarvodaya Hospital. The plane consisted of four persons – two pilots and two aircraft maintenance engineers. All four in the plane and a pedestrian died immediately in the crash. As per the reports, VT-UPZ was previously owned by Uttar Pradesh government and has had a history of accidents. The plane has had a flat belly landing first in Allahabad, Uttar Pradesh, following which it was declared scrap and which it was bought by UY Aviation.

According to the officials, the plane was supposed to have its first test flight on Wednesday 27 June, but due to rain, it was put off for Thursday 28 June. The aircraft took off from Juhu Aerodrome at approximately 12:20 hours IST on 28 June and flew for around 40 minutes as per the air test profile, it said adding the contact with Mumbai ATC was reportedly lost at around approx 13:00 hours IST and later at approx 14:14 hours IST the wreckage was later found near Ghatkopar.

Two days after the incident took place UY Aviation issued a statement saying all necessary requirements and approvals were in place. Prabhat Kathuria, the husband of co-pilot Marya Zuberi, questioned the air-worthiness of the ill-fated plane belonging to the UY Aviation.

Twelve hours before the test flight, Surbhi Gupta, one of the maintenance engineers, on a routine call with her father told him that the aircraft will go on with the test flight despite being in ‘sick’ conditions.

The aircraft was operated under Rule 15 of the Aircraft Act, which requires all aircrafts registered in the country to possess a current and valid Certificate of Airworthiness (C of A) before it is flown. The exception, as in the case of VT-UPZ, was that an aircraft can be flown without a valid C of A for the purpose of flight test for renewal of C of A in the vicinity of the departing aerodrome.

“There are three important points that this crash has raised. First, why should a test flight be carried out over a populated area? Second, why fly when it is raining and chances of sudden weather changes are possible, and third, why was it flying in the afternoon – when it is busy business time, both in the sky and on the ground,” Vipul Saxena, a former Indian Air Force pilot, said.

Even after a week of the incident we still don’t know who is to be blamed for the irreversible damage caused. Is it the irresponsible attitude of the officials or the lack of expertise and disaster management skills that the pilot and co-pilot hold?