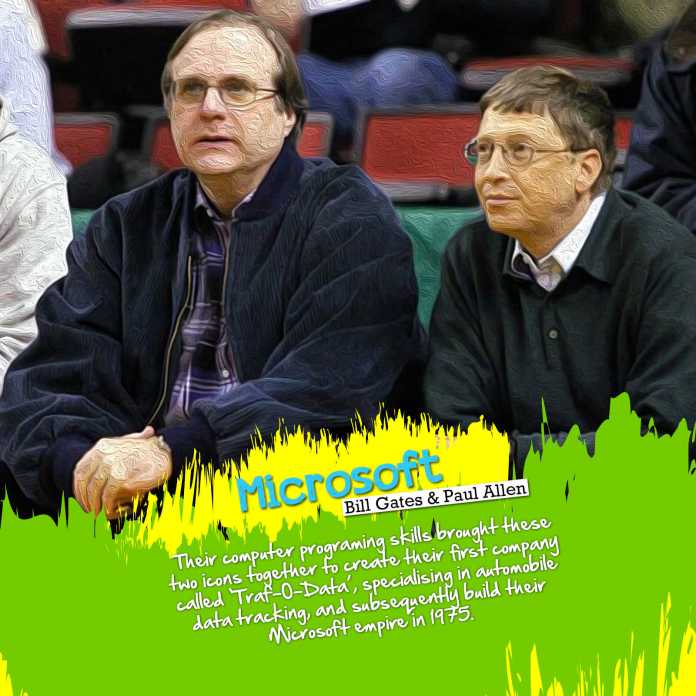 You are the company you keep, but you also are the company you work with! Having a friend (or friends) where you work is important, considering that you probably see them almost every day of your life! You share important notes, a laugh or two (and even some office gossip). These friends however, chose to take it to the next level, and start their own venture together. Here are some dynamic duos, a few legends and the others well on their way to world domination, who built their careers and reached the top, right by each other’s side –

Childhood friends Ben Cohen and Jerry Greenfield met during a high school gym class and have been inseparable ever since. Their shared love for food made them take a correspondence course in ice cream making, post which the duo made a $12,000 investment and opened their first ice-cream shop Ben & Jerry’s. The ice-cream chain is now a multi-million dollar empire, expanded around the world. A shared skill for computer programming is what brought childhood friends, Bill Gates and Paul Allen, together, and create a legacy. Their first company was called Traf-O-Data, specialising in tracking and analysing automobile traffic data. Microsoft was officially founded in 1975, and opened doors to its first international office four years later in Bellevue, Washington. Founders Kunal Bahl and Rohit Bansal were childhood friends who did everything together, including studying for exams, before academics briefly diverged their paths. Although they studied for the IIT entrance exam together, only Bansal got through while Bahl moved to the US to pursue his engineering studies. As fate would have it, they ultimately got together to pursue their dream of running a business together, which led to the birth of Snapdeal. The name “The Image Code” is no stranger to the world of fashion. A passion for creative expression through fashion brought two powerhouses Aalia Nensey, a fashion stylist and luxury reporter, and Tina Kakkad Dhanak, an image consultant and bridal stylist, together to form the ‘Image Code’, a leading fashion house for style, beauty trends, and luxury reporting. A brainchild of Nayantara Thomas and Farah Shroff, the duo feeds Mumbai with the most exquisite treats from the French pastry scene. Nayantara has mastered her craft from the renowned Le Cordon Bleu in Paris, while Farah set off to the Ferrandi Institute. When the two returned to Mumbai, they knew they had to give the city a taste of Parisian delights. They are now gearing up for their very own Patisserie and Cafe in Mumbai. Self-confessed stationery addicts Sanaa Jhurani and Ayesha Wadhawan’s entrepreneurial venture began out of a desire to provide good quality stationery in India, a niche that hadn’t been given much thought to. The two met at their previous workplace and became best friends and are now business partners. Thus came ‘The Papier Project’, a premium stationery enterprise that gives its patrons the most vibrant and aesthetically creative products.