A lunar spacecraft weighing around 3.8 tonnes is said to carry out a soft landing on the moon. This mission is going to launch on 15th July at 2.51 a.m. in Sriharikota, Andhra Pradesh. The Chandrayaan will include three modules, the orbiter, lander, and the rover. These modules are designed with the purpose of conducting various experiments like detecting sparse molecules of water above the surface of the moon, map the moon’s surface, studying the presence of minerals and chemical compositions.

The landing is expected to take place either on the 6th or 7th September. Launched by ISRO (Indian Space Research Organisation) this mission is a 978-crore rupees project. If the Chandrayan mission receives success, India will be the fourth nation to have accomplished a great task like this, after the US, China, and Russia.  The spacecraft is said, will take 15 minutes to land and will land on the scarcely explored south polar region of the moon

Chandrayaan 2 is the second lunar spacecraft mission set to land on the moon. The first mission named Chandrayaan 1 was launched 11 years back in the year 2008 under the governance of former prime minister of India, Dr Manmohan Singh.  Launched on 22nd October 2008, Chandrayan 1 orbited the moon for more than 3,400 times. This is how we discovered that there were water molecules present on the surface of the moon. After the spacecraft completely its life cycle, we lost all communication with it on 29th August 2009. The first lunar mission had cost the government around 400 crore rupees.

Sources state that two women are going to lead the Chandrayaan 2 mission. What makes the second Chandrayaan different from the first one is that this lunar spacecraft has a lander that is going to make a soft landing on the surface. The modules namely, the orbiter, rover and lander will float around the Earth for 16 days and gradually move closer towards the lunar orbit in the time period of five days and orbit around the moon for about 27 days till the time the lander gets separated.

The data collected by the spacecraft will be examined by the Indian scientists after which it will be shared with the global scientists. 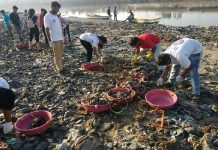