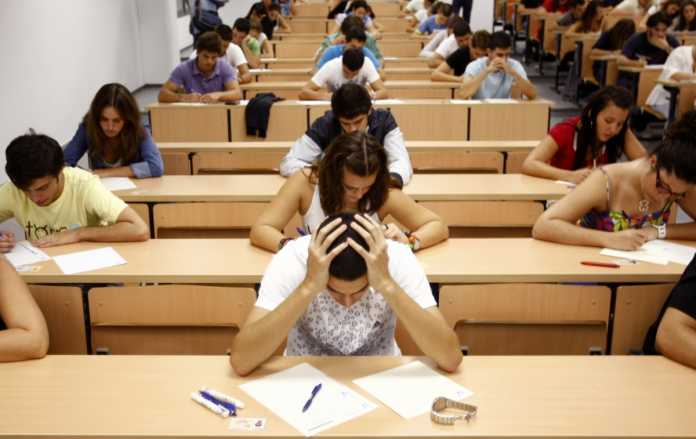 Lakhs of students across the country were left furious, as the 10th standard Math, and 12th standard economics board papers were leaked.  The CBSE paper leak exposed the vulnerability of the foundation of our education system. This goes on to show how easy it is to attack our education system, and how one single document carries power to strike chaos across the country.

The Central Board of Secondary Education has over 18,000 schools following its curriculum, thus the leak affected a massive number of students. It all started in Una, a town in Himachal Pradesh, with superintendent Rakesh Kumar of DAV Centenary Public School. Sources say Rakesh was promised the post of principle by his sister-in-law if, he could get her access to papers before the exam. This led him to leak the papers in handwritten form, and circulating photographs on Whatsapp. Alongside Kumar, who confessed when interrogated, two of his accomplices also were arrested – a clerk Amit Sharma, and peon Ashok Kumar.

Protests sparked across the country by infuriated students upon hearing that they had to retake the exams, and they even demanded the resignation of board chairman Anita Karwal. In Delhi, protests were held at Parliament Street, and were on the verge of spreading towards Union minister Prakash Javadekar’s house, but the police intervened and prevented things from taking a bad turn. The students accused the board for toying with their future, and demanded a re-examination for all subjects, or neither.

Finally, the CBSE gave in to their demands and did not re-conduct the Math exam for grade 10. However, grade 12 students had to bear the brunt and retake their economics exam.

We spoke to Mallika Singh, a student from Delhi who had to retake the economics exam, she says, “I think it’s a known fact that every single paper had been leaked from English to Economics and I believe events like this have taken place in history too. However, it is probably the first time when it has received so much attraction, and CBSE seems to have gone into damage control. Rather than shifting the blame and avoiding responsibility, CBSE should work on filling the voids and prevent such a disaster from reoccurring. Moreover, it’s pretty unfair for the students to pay the price for someone else’s carelessness. We have to go through the exam stress all over again”

The system cannot be made foolproof if teachers misuse their status and use it to their personal advantage. To improve security, CBSE has declared that no hard copies of exam papers will be sent to schools. The papers will be sent via the internet in a digital form, and those who do not have access to the internet will receive CDs. Heavy encryption will be added as a security measure, which will only be decrypted by the superintendent an hour before the exam.

Besides the CBSE and the government, the responsibility to not cheat lies with the teachers, and the students also. It isn’t fair for students who have toiled day and night in preparation for the exams, and while others rely on deceiving the authorities in order to achieve success.