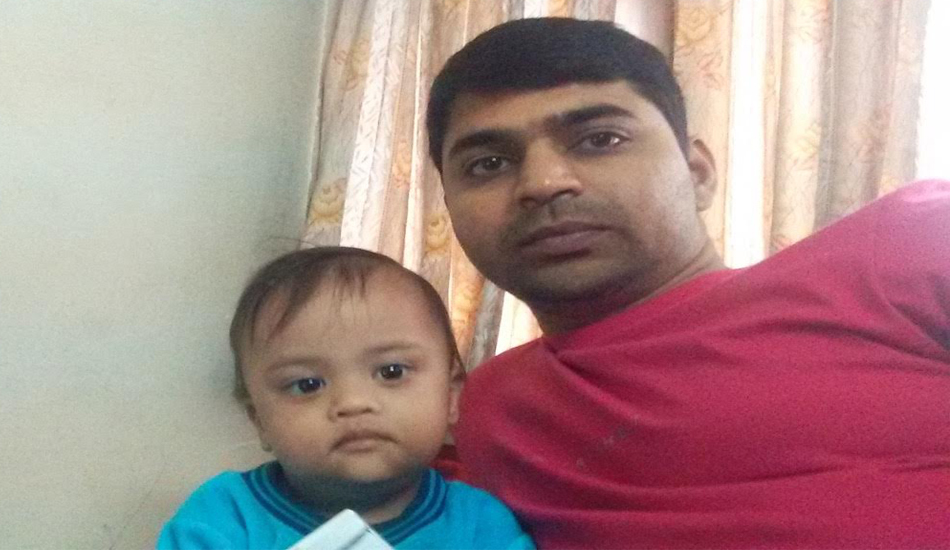 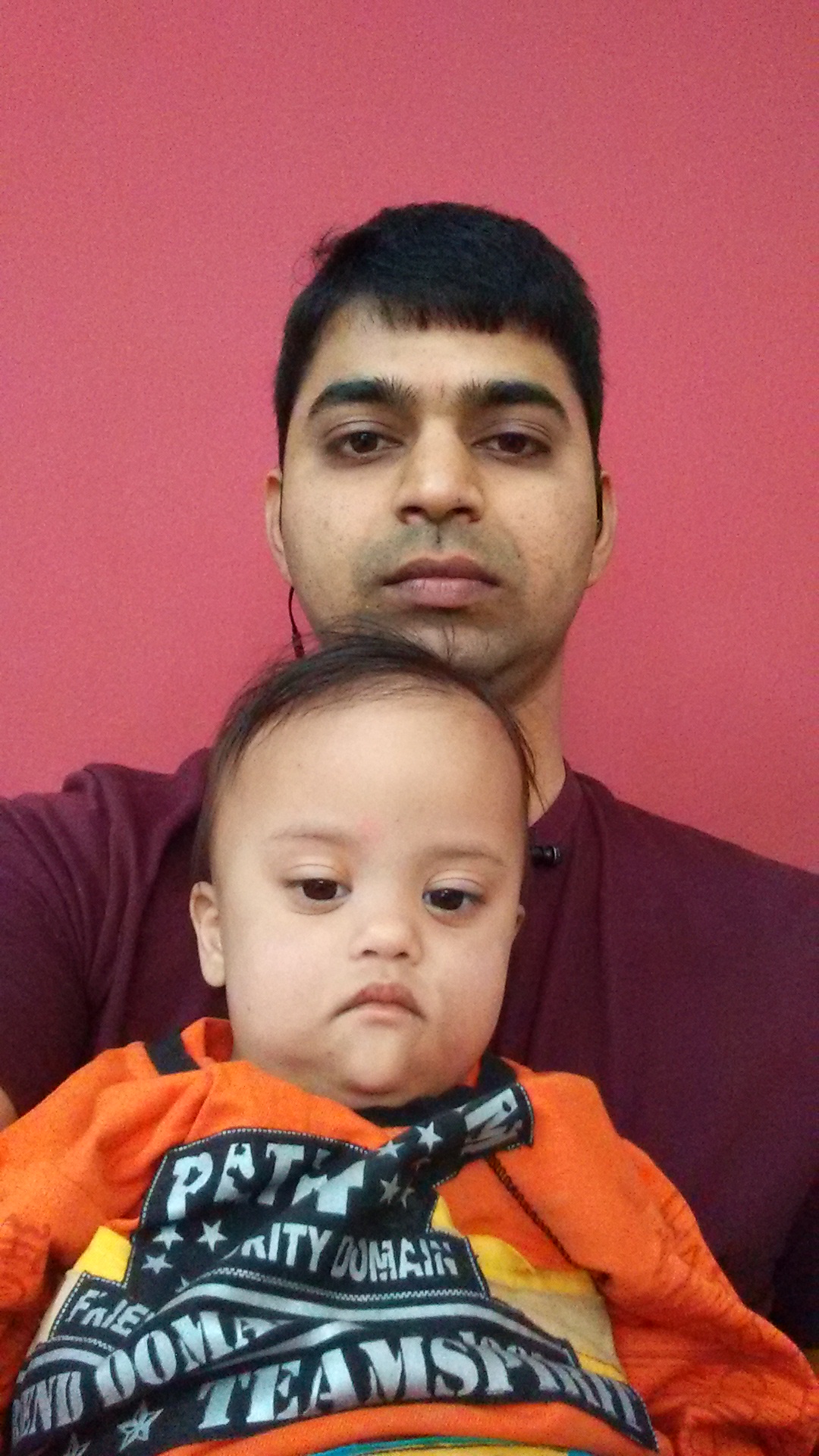 At the age of 28, Aditya Tiwari has become India’s youngest single father, after adopting his son, Avnish, who suffers from Down syndrome. We talk to the young Dad about fatherhood, adoption processes and his bond with his son

YOU CHOSE QUITE AN UNCONVENTIONAL ROUTE, AT LEAST FOR THE INDIAN MENTALITY. HOW DID YOU COME ABOUT WITH MAKING THE DECISION TO ADOPT YOUR SON?
On 13th September, 2014; it’s my father’s birthday. I visited an orphanage called Missionaries of Charity in Indore, which is my hometown. I’m a software engineer for Barclays in Pune. I was born and bought up in Indore, Madhya Pradesh. And I keep visiting Indore as my family still lives there. It was my first visit to an orphanage, and at my visit I saw a lot of kids; some adopted, some still not adopted. And there was this one kid who nobody wanted to adopt. His name was Binny. Upon further inquiry, I found that Binny was the only kid who wasn’t adopted, because he was a ‘special child’, as the caretakers anointed him. Now back then I didn’t know what a special child was. The caretakers told me he was an abnormal child and he won’t have a normal mental growth. They told me his legs are weak, he has some issue with his eyesight and he has a hole in his heart. They also told me his parents gave him up to the orphanage because he isn’t a normal child.
Even after I left the orphanage that day, I could picture Binny’s face in my head, so I thought on it and decided to adopt him. I wasn’t aware of any of the adoption guidelines yet so when I went over to the centre head of Missionaries of Charity, they told me that they couldn’t let me adopt Binny as it was against the guidelines; I wasn’t married and was under the age of 30, which used to be the minimum age for single parent adoption. I told them that was okay, but I wish to take care of all of his expenses and when I get married in the future, I will adopt him. They agreed and I started taking care of his expenses since then. It has been a long and hard battle from then till now to adopt my son.

HOW DID YOUR PARENTS REACT TO YOUR DECISION?
Well, at the start, my parents weren’t really happy with my decision. And it was for very obvious reasons. The thing is, we as a culture do put a lot of importance on ‘what will people say?’ In fact, even if were doing something wrong and other people at large are appreciating it, we will accept it. My parents were just troubled and worried at the mental, physical, and financial turmoil I was going through for this adoption. Secondly, I was trying to adopt a special needs child. And even today, in India, it is hard to find a partner ready to accept an adopted special child. It is after all, an additional responsibility. But the day I took over the custody of the child, everybody started appreciating it. Articles were published all over the media, and people were happy and appreciative of my efforts. My parents also were very happy and proud of me. So while it did take a while for them to understand and accept my decision, in the end, all was well. All they care about now is their grandson, and they have no concerns anymore.

WAS THE ADOPTION PROCESS HARD FOR YOU? HOW DID YOU GO ABOUT IT?
The adoption process was quite intense. From being someone who didn’t know anything about Down syndrome or India’a adoption process, today, I have gotten to a place where I have experienced all of it firsthand. Binny was moved across various centers of Missionaries of Charity; Indore, Delhi and Bhopal. At the start, they tried to hide him from me, told me that they would file a police complaint against me if I didn’t stop pursuing him. I have gotten the media involved, I’ve spoken to CARA (Central Adoption Resource Authority), ministers like Maneka Gandhi and Maya Singh among others for help, and basically gone through a whole lot of travel, emotional and financial turmoil in my quest for Binny. My only thought was that I wanted to give this boy a family, who was abandoned by his only because he had Down syndrome.

DID YOU ALWAYS PLAN TO ADOPT?
Adoption has been my childhood dream. I was always inspired by my parents to help people. They haven’t adopted anybody, but they’ve always helped people in whatever way they can. The first example of adoption that I’d ever seen in my life was Sushmita Sen’s, when she adopted her first daughter some 15-20 years ago. And it was right then that I had decided I will be adopting a child in the future. I hadn’t decided then if I will be adopting a girl or a boy, or whether it will be after marriage or before. My initial plan was to, of course, adopt after marriage. But I knew forever that I will adopt a child.

AVNISH WILL NEED A LOT OF THERAPEUTIC AS WELL AS MEDICAL ASSISTANCE AS HE GROWS UP. HOW DO YOU PLAN TO DEAL WITH THAT?
The truth is, as a country, we are not ably equipped to deal with the needs of a special child, especially one with Down Syndrome. There isn’t enough awareness about it in our society. After these articles were published, I have received a lot of calls from all over the world, including UK, US, France, Australia, Canada, among others, telling me of various ways to help and take care of a child with Down Syndrome. In India, the ratio for kids with Down Syndrome is 1 in 500-600 kids. And there are more cases in the US and Europe comparatively. Now though Down Syndrome cannot be cured completely, it can be corrected up to 50-60%. Avnish has a hole in his heart, which will get corrected by surgery. His legs are weak, so he will need a therapist for that. He will also need speech therapy. My aim is to make sure that Avnish doesn’t have to depend on anybody in the future. I want to make him independent.

WHAT IS YOUR MESSAGE TO THE YOUTH AFTER YOUR EXPERIENCE?
My message to the society after almost one and a half years of my experience with adoption is very simple. I’m a single person from a middle class family. I’d just like to tell the parents at large, who are educated, belong to well to do families; they are dropping their kids of at an orphanage because of the fear of society. I’d just like to tell them to not care about the society and just take care of their child. Secondly, I think the government and the society should encourage people who want to adopt a child, whether they’re married or single. After all, we are all human beings and we are here to help each other. If I want to adopt a child, it’s my prerogative, and it’s a good thing. So why should anyone else think about why I’m doing it, and if nobody does it usually, why am I doing it? We always think from a profit perspective. Society always tends to ask you what your profit is in something you want to do. Sometimes, there isn’t a profit. And that doesn’t make something I want to do any less important or right.

My only thought was that I wanted to give this boy a family, who was abandoned by his, only because he had Down syndrome.