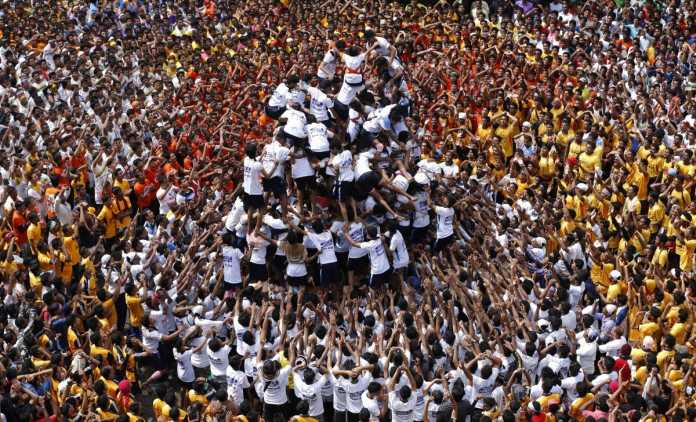 Celebrated in the months of August/September, this festival marks the celebration of the birth of Lord Krishna – Janmashtami.  Krishna is believed to be the eighth incarnation of Vishnu and holds a place of significance in the Hindu pantheon. Legend has it that Krishna would steal butter and other milk products from his community. The community would keep it in a handi (earthen pot) out of his reach and Krishna would always find creative ways to reach it- one of them included forming a human pyramid with his friends. Thus, this practice went on to be called Dahi Handi. Later Dahikala (ingredients in the pot) is distributed among everyone. There are cash prizes too for the winning teams.Dahi Handi celebration encourages working in a team, thus signifying the importance of team work. This festival is a way of reliving the mischief and pranks played by Lord Krishna.

There have been protests against this  practice because each year, it isn’t unusual to expect cases of people falling from these heights. Considering how risky the practice is, the height of the pyramid for Dahi Handi has been decreased. The pyramids will be less dramatic, yes, but definitely much safer at no higher than four to five layered.

Nevertheless, celebrations continue in all it’s pomp and glory have become a huge business affair with a lot of sponsors, politicians and tourists involved. NCP, Shiv Sena and MNS are the most active participants when it comes to the dahi handi celebrations. Although several restrictions have been imposed this year, including the 20 feet cap on the height.

Here are some of the best places to witness dahi handi in Mumbai:

It is organised by the politician Sachin Ahir. The dahi handi held here is one of the tallest Dahi Handi competitions in Mumbai. It is held at the Jamboree Maidan on G M Bhosle Marg in Worli. It is popular because of Bollywood celebrities who make appearances and sometimes even perform here.

It is named after MNS MLA Ram Kadam who also makes significant presence here. The dahi handi mandal in Ghatkopar attracts Govinda pathaks from all over Mumbai.

Organised by MLA Jitendra Ahwad, this is one of the the richest dahi handi mandals in Mumbai. Prize money often goes up to lakhs of rupees with the occasional few grams of gold, and music and enthusiasm fills the air.

One of the popular mandals in Thane, the Anand Charitable Trust handi is organised by Shiv Sena MP Rajan Vichare.This is one of the dahi handi venues to look out for as it has its share of loyal local enthusiasts.