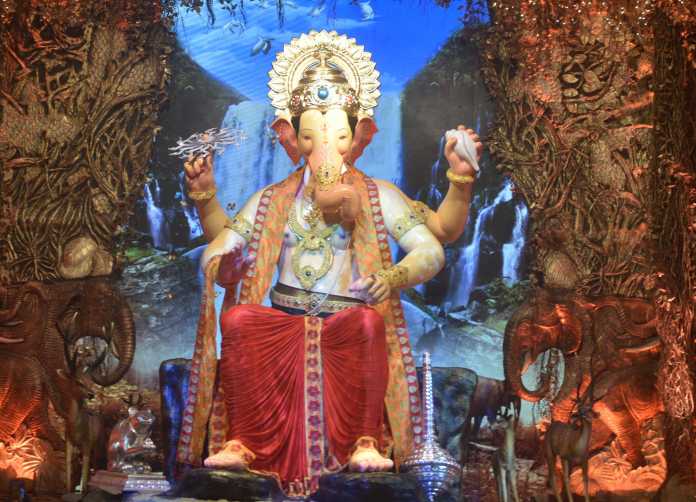 It’s that time of the year again – when vibrant colours fill the atmosphere, the sound of beating drums echo in the air, devotees line up in large numbers to pay their respects and some delectable modaks are dished out on at every nook and corner of the country. The Holy Festival of Ganesh Chaturthi is a few hours away, and while excitement and anticipation fills the air, we bring you the best places in the country to revel and witness the fanfare surrounding this festival in all its glory –

Ganesh Chaturthi is celebrated across Indian homes but the heart of the festival lies in the city that never sleeps. Kudos to the ceaseless efforts of Lokmanya Tilak who rightly believed that it would help to bring Indians together, during the freedom struggle, as well as the jolly spirit of the Mumbaikars who manage to put up a terrific festival, each year better than the previous. For ten days, the city is adorned with majestic Ganpati pandals. The biggest and Mumbai’s favourite Lalbaugcha Raja, presides nonchalantly over a sea of a million visitors. This 12-foot tall Raja raises crores of rupees each year, and much of it is finds its way back into the community through initiatives such as health camps, scholarships and hospitals. Must-visit pandals include the ones at GSB Seva Mandal, Khetwadi, Ganeshotsav Mandal in Girgaon, Utsav Samiti in Azad Nagar, and Utsav Mandal in Chinchpokli.

Pune sees a clutch of pandals and temples that celebrate the festival, the most famous being the Dagdu Sheth Halwai temple, which is the epitome of pride and honour. It sees a least a thousand pilgrims during the ten-day festivities and some of them include chief ministers and other political bigwigs. The temple was named after a famous sweet trader. For those of you with a sweet craving, indulge yourself with glorious treats from the Halwai shop nearby. Also, if you’re looking for a getaway during this auspicious week, you might find a trip to this temple perfectly rejuvenating. Other famous pandals are the Tulsi Baug Ganpati, Kasba Ganpati, Tambdi Jogeshwari Ganpati, Kesari Wada Ganpati and Guruji Talim Ganpati.

Bangalore witnesses Ganesha celebrations in its own style. As in Mumbai, one can witness various pandals across the city. And the city comes alive and witnesses grand festivities for a minimum of five days. The must-visit temples during Ganesh Chaturthi in Bengaluru include Panchamukha Heramba Ganapati Temple, Shri Jambu Ganapati Temple and Ananthanagar Ganapati Temple. And if you wish to witness the immersion spectacle, head to Sankey Tank or Ulsoor Lake. If you are looking forward to cultural activities this time of the festival season, Ganesh Chaturthi is the right time. Bangalore today has become the hub of many local and national cultural activities as many temples, cultural organisations and resident welfare organisations in the city have geared up to give a plethora of music and dance programmes across the city, like concerts and dance recitals.

Ganesh Chaturthi is celebrated with all its pomp and glory as in any other state in the country. Khairatabad is iconic for its Ganpati celebrations, and boasts of one of the largest Idols in India, at 50 ft in height and undergoing a construction period of nearly four months. A large mass of devotees including a number of VIPs make a beeline for worship. If you are in Hyderabad on the 11th day of the festival, head right to Hussain Sagar Lake to watch procession and final visarjan. You can also visit the Gowlipura Ganesh Pandal, Balapur Ganesh Utsava Samithi, and Durgam Cheruvu, which houses the largest Ganesha idol in Hyderabad, made out of clay and standing at 72 feet tall.

Although the festival in Chennai is not as gloriously celebrated like in Mumbai, it is most definitely worth watching. For those of you eco-friendly freaks, Chennai is your ideal destination this festive season. The sparkling hues of vermillion and turmeric, garlands of shredded grass and ribbons of sliced coconuts adorn an eco-friendly idol of Lord Vinayaka (Ganpati is referred to as ‘Vinayaka’ in the southern states of our nation). The festival is also called Vinayak Chaturthi here. You can catch the festivities at the Sarvajanik Ganesh Pandal, or make your way to Marina Beach for some hard-to-miss celebrations.