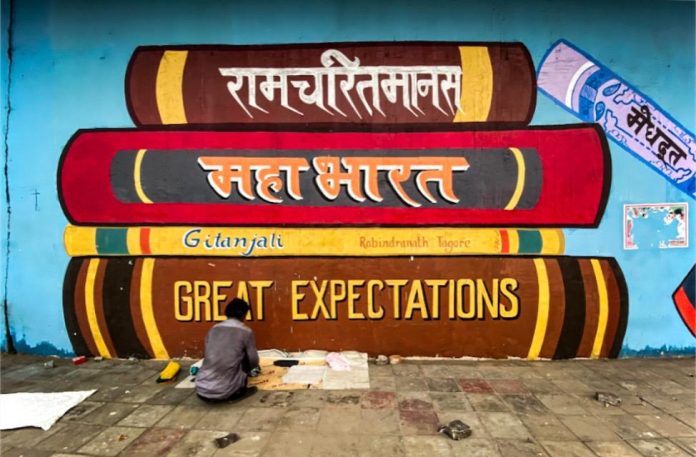 The morning of 5th November was veiled in a blanket of smog. The sun had risen but the light could not penetrate the smoky shroud. It was no Macbeth’s prophecy and someone who knows Delhi, even half-heartedly, would have predicted the weather conditions. I too, well aware, was eager to capture an image of a post-Diwali city that had developed in my head. Rather poetic, my imagination painted the stone blue sky with heavy grey strokes of pollution; boats piercing the still waters of the Yamuna on which hungry seagulls jumped.

At 7am, I took an auto-rickshaw to Kashmere Gate to capture the Romantic photograph. The driver was a cheerful lad, who, while steadily smoking his cigarette kept the journey interesting by abusing the festival for hampering his vision. When we reached near the Ghat, he made a left turn to drop me at the banks of the river. The auto-rickshaw dived into a curtain of smog, which had settled on the road leading to the bank. Men wrapped in shawls peaked out of that curtain, walking unhurriedly with an air of indifference. It looked like a still from a surreal film, literally breathtaking.

“The river is 10 meters ahead of you”, claimed a baba sitting on a concrete stone but I could not see him. I could not see the river. I had to believe his words that there was a river called the Yamuna, 10 meters ahead. The driver raised his concerns about staying at the Ghat and I had to leave Radha to dance on the stage of Jamuna in the privacy of smoggy curtains.

On my way back while waiting for an auto, I strolled around the ISBT ramp that was inhabited by homeless men sleeping on plastic sheets spread on the ground. Some were sleeping away from the edge of the main road behind bushy fences running parallel to the flyover. Delhi was far from peak winters and an old headline flashed in my head, “…colder winter for Delhi this year.”

The wind was too heavy to move freely for all that had settled into the air. I stopped near a tea stall where a bickering drunkard kept looking at my wheezing chest. In plain discomfort, I moved towards a mural depicting a young girl reading a book, somehow sending a message of girl education to the fast drivers. The teal blue paint, which once must have been bright like that girl’s future, crusted on the wall.

What began as a journey to capture the poetics of the afflicted city, ended on a remorseful stop. Does plastic repel cold? And a picture of homeless men sleeping under the flyover wasn’t an extraordinary sight. “Should I click it?” I thought. Should I have clicked the man looking at my chest? There was nothing to capture with a blinded lens. Every issue was hidden in negligence and smoke. Forgotten like the girl in the mural left to read on her own in the bright light of a painted lamp. It is hard to map progress in the dark.

At the corner of the mural a fellow country-man was wrapping his plastic bed under an intellectual burden. I concluded my expedition with a final empathetic glimpse at the man and at our great expectations.